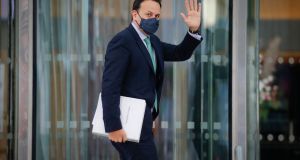 Tánaiste Leo Varadkar arrives at the Convention Centre for a sitting of the Dáil. Photograph: Crispin Rodwell

Tánaiste Leo Varadkar’s suggestion that cross-Border travel before Christmas should be discouraged has been supported by the National Public Health Emergency Team (Nphet).

However, Mr Varadkar insisted on Thursday that he had never proposed to the Fine Gael Parliamentary Party that cross-Border travel should be banned outright.

There was no question of a ban, nor had it ever been considered or discussed, he told the Dáil, adding that inter-county travel would still be restricted should the State move to Level 3 of the Government’s Living with Covid-19 plan when restrictions are eased next week.

Such a restriction also applies to cross-Border travel, although nobody was actually prevented from crossing the Border. Only essential travel is recommended.

“Inter-county travel, including cross-Border travel, for shopping or for visiting friends and relatives will not be allowed,” he told deputies after he had faced criticism over his reported comments.

“We hope to be in a position to advise people that they can travel between counties, including Northern Ireland, to visit friends and relatives closer to Christmas. However, that will depend on the epidemiological data.”

The Tánaiste told the Dáil that Covid-19 case figures in the North were still much higher than in the South but that situation might change closer to Christmas, at which time decisions on travel outside one’s own county, or the jurisdiction, would be made.

The most senior members of the Northern Ireland Executive, First Minister Arlene Foster and Deputy First Minister Michelle O’Neill, both criticised the Tánaiste’s comments about travel, even after his clarification.

Ms Foster said she was “astounded if not a little surprised” that Mr Varadkar was indicating “that people from the Republic of Ireland would not be able to travel to see their families in Northern Ireland during the Christmas period”.

“It is really regrettable that the Tánaiste should make those sorts of comments,” she added.

“It appears the Border has made a reappearance again after Northern Ireland being lectured for four years in the context of the European Union [Brexit] negotiations that the Border was completely open,” she said.

Ms O’Neill added: “Leo Varadkar has demonstrated again that he’s completely out of touch with the reality of life on this island. I think his commentary reflects that.”

Meanwhile, Nphet has told the Government that inter-county travel should not be advised until very close to Christmas and only then if restrictions on the hospitality industry remain.

Mr Varadkar questioned the logic that the availability of alcohol in a “controlled” pub setting would reduce the risk of infection and discourage house parties that would otherwise be held.

“Just because people can gather in a pub doesn’t mean that an equal number of home gatherings won’t happen,” he said.