Reopening cultural centres ‘must be a priority’, says Arts Council 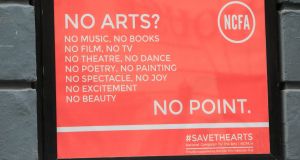 A Save the Arts poster at the Irish Film Institute in Dublin. Photograph: Gareth Chaney/Collins

Galleries and arts centres should be allowed to reopen next week when Level 5 lockdown ends, the Arts Council has said.

He was making his plea following media speculation that museums and cinemas would to be allowed open, subject to social distancing.

Mr Rafter told an Oireachtas Committee on Wednesday: “In moving from Level 5 restrictions, the value and importance of in-person engagement with the arts must be recognised. And keeping doors open must be a priority.”.

He said having attended indoor performances at the Kilkenny Arts Festival in August and the Dublin Theatre Festival in September – “which operated under strict safety procedures” - he was asking Government on behalf of theatres: “please open their doors”.

Earlier, the Oireachtas Committee held a discussion on the impact of Covid-19 with representatives from An Coimisiún Le Rincí Gaelacha, teachers of Irish Dance.

Dance teacher Carol Carberrry told the committee dance helped developed good behaviour and self discipline and good mental health in children. She said classes should be allowed once schools were back.

Also on Wednesday, the Irish Federation of Yoga Teachers said it was seeking to have Yoga deemed as an essential service during the next phase of Covid-19 restrictions.

The federation said while many independent yoga teachers and studios went online, many have not been in a position to do so. Irish Yoga, teachers, studio and yoga business owners had now come together with a shared voice expressing the value and importance of yoga at this time, the federation said,

The call to reopen arts venues was supported by a number of members of the Oireachtas Committee on Arts, including Senator Malcolm Byrne (FF) who is involved with community drama groups; Ciarán Cannon TD (FG) who operates a small theatre in east Galway and Johnny Mythen TD (SF) from Wexford who said other countries including Denmark had shown how it was possible.

Mr Byrne told the committee he would also like to see performers treated like elite sportspeople and allowed to travel. He said people should be allowed to open galleries as conditions would be more crowded “in a supermarket”.

Mr Cannon said “there is something really special” happening in community arts from Clifden to the Shorelines Festival in Portumna and the State needed to nurture “that eco-system at local level”.

Mr Mythen said Denmark had shown that theatres could be kept open with testing and he suggested authorities looked to other countries to see how this was done.

Cork TD Christopher O’Sullivan (FF) welcomed Prof Rafter’s presentation to the committee but said he was aware of many local artists who had applied to the Arts Council for funding without success.

Senator Fintan Warfield (SF) said the extra funding assigned to the Arts Council this year and an additional €50million promised for next year was making a difference to artists whose work had disappeared overnight. He said “many people who had been knocking on the door for many years had received funding for the first time this year”.