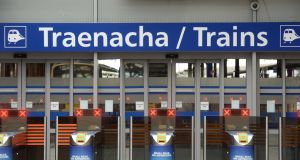 Rail passengers are facing significant disruption this weekend as both Dublin’s Tara Street and Pearse stations are closed to facilitate roof works.

Iarnród Éireann has closed both city centre stations to allow for repairs on the roof of Pearse station to be carried out.

The roof structure, which dates back to the 1880s, is in poor condition, and replacing the structure was identified as a “crucial safety project” by Iarnród Éireann.

Protective mesh netting has been in place in the station below roof level in recent years to protect customers and rail services.

On Sunday, Dart services will operate between Howth/Malahide and Connolly, and between Grand Canal Dock and Greystones only.

Irish Rail said that bus transfers will operate between Connolly and Bray for Connolly to Wexford/Rosslare Europort services.

All northern commuter and Maynooth commuter services will operate to and from Connolly station.

The roof replacement project will cost €17 million and is funded by the National Transport Authority. It will take place over a period of 23 months.

Physical works are taking place between September 2018 and July 2020. A total of up to 13 dedicated construction weekends are likely to be required during this time to allow for crane operation.

Previous weekend closures took place in October, January, February and March. A scheduled closure in June was postponed due to the Leinster Hurling final.

The next weekend of Pearse station roof works affecting services will be on September 7th and 8th.

Iarnród Éireann has apologised to customers for the inconvenience caused.

State exams may be delayed until late summer or autumn 02:54
Coronavirus: Doctors fear Covid-19 yet to peak in the State as ICUs near full capacity 02:01
Coronavirus: Call for nursing homes to carry out their own Covid-19 tests 01:42
Campaign begins for €114,130 Seanad cathaoirleach job 01:00
Putting the new coronavirus firmly in the picture 01:00