Village was home to diplomat’s mother, Mary Healy, who emigrated in 1927 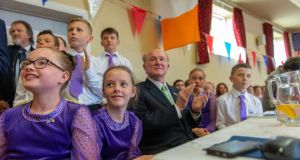 US ambassador to Ireland Ed Crawford (centre) with members of the Boherbue Set Dancers during his visit to his ancestral home in Boherbue, Co Cork on Friday. Photograph: Michael Mac Sweeney/Provision

US president Donald Trump may have caused outrage when he told four Democrat Congresswomen to “go back” where they came from but it was all smiles when newly appointed US ambassador, Edward Crawford took his president’s advice and returned to his ancestral home in Co Cork.

The small village of Boherbue in the heart of Duhallow in north Co Cork turned out in style and in great numbers to welcome home Mr Crawford whose mother, Mary Healy left the village in 1927 at the age of just 16 to make a new life for herself in the US.

A multimillionaire from Cleveland Ohio, Mr Crawford wouldn’t be drawn on the growing controversy in the US over Mr Trump’s comments about the four Democrat politicians but he was happy to talk about what coming back to Boherbue meant to him.

“My mother was born here in Gneeves in the village and some 90 odd years ago here she left to go to the US for a brighter future – I’ve returned here five or six times over the years and like my mother, I’ve always kept Boherbue close to my heart,” said Mr Crawford.

He recalled with a smile how he returned on one occasion with his brother, Gerry and they were intent on enjoying a few pints in a local pub only for his late, aunt Cecilia – a well known figure locally and a fervent Pioneer – rounded up some fellow Pioneers to put a stop to their pinting!

“Aunt Cecilia was unique – she had a spark in her that represents the traditional Irish spirit and my mother had that spirit too – I learned from her the importance of resilience – I think the Irish or at least some of the Irish have this great resilience to help them deal with rejection.”

Welcomed by a host of cousins including his first cousin, John Hennessy, Mr Crawford was also welcomed by Community Council Chairman, Michael Cronin who said his late mother, Mary would be so proud to see her son return to Boherbue as US ambassador to Ireland.

Among the others to welcome Mr Crawford was local GP, Dr Mary Leader who wrote to him a year ago and invited him to drop in for a cup of tea whenever he became US ambassador and former Irish rugby star, Frankie Sheehan whose family roots also lie in Boherbue.

Mr Crawford was presented with a history of Boherbue by local historian Louis McCarthy and a Boherbue GAA jersey before being treated to exhibition of Irish dancing by Caeleen Feehan and Marie Sheehan whose great-grandmother, Lena O’Riordan left with Mr Crawford’s mother for the US in 1927.