London Irish loneliness: ‘In a pub no one would talk to you’ 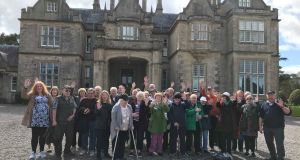 In 1957, aged 23, Thomas Mulligan left his home in Lucan, Co Dublin, for England, to find work and a better life. By the end of the decade, he had become one of nearly 60,000 Irish who had made the journey.

Mulligan’s story is a familiar one. He found work as a plasterer, before setting up his own business and settling down in north London with a family of five. Though it is home, London often feels like a lonely place for him, he says.

He says it’s “a good place even just to meet people for the craic”. Mulligan lives alone but has regular visits from his family, and charities and support groups are a vital presence in his life.

The thoughts of many older Irish people in London have centred this week on John Lynch from Ballylongford, Co Kerry, who was set to be buried without mourners on Wednesday until a call-out was made to the Irish in the city.

He had spent his last months in a care home in Greenford in west London. Unlike Mulligan, Lynch had no one in his circle. For many, it is a stark reminder that some slip through the cracks. Sometimes, the reasons are complicated.

“The pubs and churches served as social support systems. There’s nothing to go to now,” especially as the Irish population has been getting older, Danny Maher says. Maher runs a homeless charity called Ashford Place. “It has created the sense of a loss of identity and the loss of our role in society, because all of these iconic places that were part of our identity have gone.”

The older generation of Irish emigrants have fewer connections with their younger counterparts than in the past, he says, because pubs and clubs “have faded in popularity and importance”.

Younger Irish emigrants are more likely to meet through social media than at the local Irish pub. Inter-generational socialising, so common in Ireland, is rarely found in London’s Irish community.

“I saw a headline in the Irish Post a couple of years ago saying ‘Clapham is the new Cricklewood’. What that said very clearly is that the new Irish generation goes to Clapham now, not Cricklewood,” Maher says.

Based in Cricklewood, Ashford Place offers accommodation to the homeless, helps some people to resettle back to Ireland, often after decades abroad, and runs a variety of community programmes.

As people get older, they want a sense of familiarity and background. They want to meet people who understand their culture

The links between loneliness and isolation are self-evident, Maher says: “We must not allow the reality of these changes in the community to cause a rise in levels of street homelessness or feelings of isolation in the community.”

The number of Irish rough sleepers in London has fallen by 40 per cent over the last five years, but this has only been possible on the back of tireless work by institutions such as Ashford Place and other Irish charities.

Despite the influx of new Irish after Ireland’s economic crash in 2008, the Irish population in the UK is rapidly ageing, and more likely to live alone. In 2011, the UK census showed that a fifth of Irish 65-year-olds live alone, the highest of any other ethnic group in the UK.

In 2001, the Irish were the largest foreign-born group in the UK, still bolstered by the hundreds of thousands who had moved there in the 1950s and 1980s.

Since then, as the 1950s generation has aged and died, the Irish-born population has shrunk by almost a quarter, overtaken by Poles, Indians, Pakistanis and Romanians.

The London Irish Centre in Camden, established in 1954, offers a range of services such as befriending groups, hardship grants and welfare advice. These service help to tackle isolation, says Brian Hanley who is the centre’s director of community services.

“As people get older, they want a sense of familiarity and background. They want to meet people who understand their culture. But these services don’t have the resources to look at the more culturally-sensitive aspects of care and support,” he says.

Cuts in public spending made by the Conservatives since 2010 have gradually eroded care services to “the bare minimum”, says Hanley.

“It’s difficult to get the basic support for people. The lack of funding does make it a struggle for groups like us to make ends meet, but it’s essential that these culturally-sensitive services are funded.”