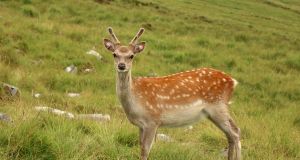 was prosecuted on poaching charges under the Wildlife Acts earlier this week. He was fined €300 and banned from holding a firearms licence for five years. Photograph: iStock

A man has been convicted of deer poaching in Co Wicklow following a “vigorously contested” prosecution that came a year-and-a-half after he was found with the animal in his vehicle.

Welcoming the outcome, wildlife officials said the killing of any deer was prohibited.

Investigators managed to prosecute the man by uncovering traces of the animal from the kill site and using DNA technology to match it to the carcass found in his possession.

He was prosecuted on poaching charges under the Wildlife Acts at Wicklow District Court earlier this week where he was fined €300 and banned from holding a firearms licence for five years.

Information released by the Department of Culture, Heritage and the Gaeltacht on Friday described how the man was stopped by garda Darragh McEvoy in his vehicle in Laragh Co Wicklow on November 10th, 2017 who found him in possession of a recently shot and gralloched large male Red/Sika Hybrid deer.

A detailed joint agency investigation followed with the expertise of Wesley Atkinson a wildlife inspector with the National Parks and Wildlife Service of the Department of Culture, Heritage and the Gaeltacht.

Later, with the assistance of the public, investigators were able to trace the location of the suspected kill near the Sally Gap on the Military Road. There, elements of the deer were found carefully concealed and extracted DNA samples proved it was the same animal.

The Department of Culture described the prosecution as lengthy and vigorously contested with witnesses examined for over three hours before the defendant was found guilty.

“The National Parks and Wildlife Service and An Garda Síochána would like to remind hunters that all deer species found in Ireland are protected under the Wildlife Acts,” it said.

“This is a prime example of the joint operations between An Garda Síochána & the National Parks and Wildlife Service of the Department and the collaborative investigation techniques to support a prosecution against poaching which is a lucrative illegal industry. Such joint agency operations will continue.”