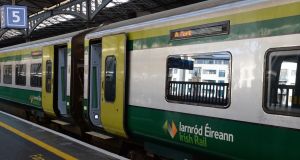 Train in Heuston Station: Unions argue it is not credible for Iarnród Éireann to continue to play the “poor mouth”. Photograph: Eric Luke

Only six months after the last major dispute in the State transport sector, the country is now on the brink of a series of national rail strikes which will inconvenience tens of thousands of passengers per day.

If the planned train strikes go ahead, it will mean that within the last two years there will have been stoppages in all three CIÉ companies – Dublin Bus, Bus Éireann and Iarnród Éireann – as well as in the State-funded but privately operated Luas light-rail system.

In many ways it was the settlement of the Luas dispute which saw workers on the light-rail system receive increases of about 3.75 per cent per year, that ultimately provided the impetus for the current dispute on the railways.

When employees in Dublin Bus secured similar rises to the Luas workers after their own work stoppages in autumn of last year, it was always on the cards that train staff, who had not received increases in basic pay for nearly 10 years, would see this as a new benchmark in the transport sector.

The three-week dispute at Bus Éireann earlier this year centred on opposition to unilateral imposition of radical cost-saving measures rather than pay rises.

However management at Iarnród Éireann believes that the financial position in the company is more in keeping with the loss-making Bus Éireann than its other sister company, Dublin Bus, which recorded a surplus of €2.6 million in 2016.

The rail company has argued consistently that its financial position remains precarious and that it has an accumulated deficit of €160 million.

The unions, on the other hand, contend that much of this deficit stems from under-funding by the exchequer over recent years and particularly to cuts in State subventions following the financial crash.

The company is projecting a €1 million deficit this year but this compares with a €7.7million loss in 2015.

Official documents given to Minister for Transport Shane Ross in recent months maintain that the improvements in the rail operator’s position are due to continued strong passenger revenues.

“Passenger revenue in 2016 was the highest recorded in the history of the company at €193.7million, with total revenue at €244.5 million favourable to prior year by €10.6 million.”

The documents state that passenger numbers increased by 8 per cent last year to 42.8 million journeys.

The unions argue that, in the light of these performance figures, it is not credible for Iarnród Éireann to continue to play the “poor mouth”.

The company, however, told the Labour Court that any increases not funded by further productivity measures would have a “catastrophic impact” on its financial position.

The unions are seeking increases without any productivity strings attached. They maintained they were very close to reaching a deal at the Workplace Relations Commission on Thursday which would have provided for a one-year stand -alone increase of 2.5 per cent – with a further €500 tax-efficient payment on acceptance – with the potential for further rises linked to productivity measures to be negotiated in subsequent months.

The unions firmly believe that Iarnród Éireann chief executive David Franks – who was not at the talks – vetoed this draft deal at the last minute. This, however, is strongly denied by the company. However, the acrimony with which the talks broke down at the Workplace Relations Commission has undoubtedly soured the atmosphere and will have made it more difficult to put the pieces back together if the first rail strike, scheduled for Wednesday week, is to be avoided.