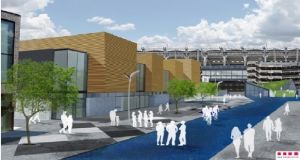 The GAA has been granted final approval for the construction of a state-of-the-art handball centre at Croke Park following a 28-year battle with local residents.

An Bord Pleanála has given the green light for the development of the new facility which will replace the existing 1970s-era handball centre within the curtilage of Croke Park, with a number of minor conditions attached to the permission.

An earlier successful planning application to Dublin City Council met with opposition from some residents in the locality but the State’s top planning body dismissed the appeal and gave the project the go-ahead with a reduced number of conditions.

The new handball centre at the southeast corner of the stadium campus will also include a bar and cafe as well as a community centre. A new street configuration will provide for an enlarged “processional” entrance to Croke Park.

The application includes proposals for a separate building hosting a gift shop, offices and a dedicated entrance to the stadium’s premium seating tier, and new housing units will also be provided to replace existing dilapidated structures which will be demolished as part of the development.

The overall estimated cost of the proposals is thought to be in the region of €12 million.

The long-standing plans caused a rift between the GAA and a prominent group of local residents for nearly three decades, and the impasse was overcome only following the intervention of former taoiseach Bertie Ahern in 2015.

The Croke Park Streets Committee last year agreed to facilitate the project’s passage through the planning process after concerns over the new centre’s impact on the local community were addressed, and the GAA struck out court proceedings relating to the matter.

A separate group who were not a party to the agreement continued their opposition to the development, citing the “decimation” of the local amenity should the plans proceed.

In a submission to An Bord Pleanála, one appellant complained that the planning application lodged by the GAA was invalid as the site notice was printed on “custard-coloured” paper rather than yellow paper, as per regulations.

The same appellant also lodged grievances about the possibility of antisocial behaviour arising from the opening of the proposed bar within the handball centre, as well as the alleged deleterious impact the new design will have on birds and wildlife.

The GAA responded that planning regulations had been adhered to as part of the process, and that detailed meetings and consultations had been carried out with the local community.

In his final report, planning inspector Stephen O’Sullivan concluded that there had been no substantial breach of planning applications, that the new facilities would be in keeping with the zoning of the lands and that there would be no significant impact on local amenity or wildlife.

He recommended that the application be granted permission with the attachment of 12 conditions, which were eventually ratified by An Bord Pleanála.

One of the conditions includes an undertaking to use the new buildings in an ancillary capacity to Croke Park, and not to lease or sell them for any other use in future.