Higgins criticises ‘politics of fear’ behind Brexit and Trump 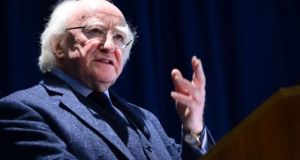 President Higgins is on a State visit to Australia. File photograph: The Irish Times

President Michael D Higgins has criticised “the politics of fear” behind the anti-immigrant policies that led to Brexit and the election of US president Donald Trump, saying there is always “a terrible price to be paid” for it.

Behind the nationalism and push to put up barriers was “old-fashioned, ignorant, anti-migrant prejudice,” he told an audience following a keynote address at the University of New South Wales in Sydney.

During a questions-and-answers session, Mr Higgins was asked what his “antidote” to Brexit and Mr Trump was. He replied by challenging anti-immigration policies in the UK and the US, saying the “evidence isn’t being put on the table of where migrants are taking the jobs of lower-class workers.”

“It is certainly the case in the United Kingdom that there is no empirical proof for this at all,” he said.

Mr Higgins estimated that migrants were responsible for between 10 and 12 per cent of the economic productivity on the planet in 2015, but said when anti-immigrant politicians are challenged with these figures, “you find people saying something like: ‘We want the productivity but we don’t want the migrant.’”

The migratory history of the Irish people should “give us a certain consciousness” on migrants’ rights, he said, and when those rights were abused, it was an international concern.

There was “a huge need” for an international movement towards a code of rights for migrants, he added.

In his lecture to the audience, Mr Higgins said that Ireland would confront “grave and difficult matters” over the coming years as it marks the centenaries of the 1919-21 War of Independence and the 1922-23 Civil War.

The matters will address “not only personal memories of consequences” of both conflicts, he said, “but profound questions regarding the economic and social trajectory of the new Irish State.”

“The most difficult commemorations for us in Ireland still lie before us,” said the President.

On the Civil War, he told a packed audience: “We must acknowledge the brutality of that struggle, the viciousness that was unleashed and the brutal tactics that were employed on both sides.”

This was the third major address delivered by Mr Higgins on his 19-day State visit to Australia.

The speech, entitled “Sharing the Tasks of Ethical Remembering - Ireland and Australia,” touched on a theme Mr Higgins has returned to again and again during his presidency as the country tackles commemorations of formative events leading to the foundation of the Irish State.

He drew parallels with the challenges facing Australia as it recalls its own troubled history and the treatment of Aboriginal people. Earlier on his trip, he acknowledged the role of the Irish in injustices perpetrated on them.

“These foundational acts of 100 years ago in Ireland might be viewed as challenges and compared with similar challenges facing Australians reflecting on the first occupants of Australia 65,000 years ago,” he said.

Scrutinising what he called “collective memory” and revisiting formative events that were “put on a shelf in our mind” was a valuable one, said Mr Higgins.

“It has the capacity to unleash that healing that may come from the journey of remembering, through understand to, in time, forgiving,” he said.

There was “truly nothing to be gained from amnesia, as comforting as it may be, and everything to be lost,” he said. “It is only by acknowledging, questioning, sometimes revising, but always remembering, in an ever more inclusive way, the events of our collective past that we can begin to build a collective future.”

Re-engaging with the past by considering “the other” releases people from “the trap of being moulded by past errors, their justification or our fear of revisiting circumstances,” he said.

“Words matter and in our present circumstances when anger is the temper of our times we need to use our words for healing rather than wounding,” said Mr Higgins.

“Doing so with ethical and empathetical intent will, I believe, be something that can enormously help our understanding of both our possibilities and our dangers.”

Introducing Mr Higgins, the university’s president Prof Ian Jacobs said it was important to remember that experiences “don’t always sit well with our preferred or romanticised versions of history.”

He welcomed the Irish in the audience from the nearby Irish communities of “County Coogee and County Bondi” drawing laughs from the audience.

Plans to evacuate Irish citizens from China virus epicentre under way 00:43
Housing the dominant issue in seven-way general election debate 00:21
Election 2020: Party leaders clash on multiple issues in TV debate 00:10
Election 2020: Sinn Féin wants new 5% tax on people earning over €140,000 00:05
‘There’s so much change that people want and that they didn’t get’ – Zappone 23:45