Monday’s storm differs to flooding, says Varadkar: ‘Nobody is in a hurricane zone’ 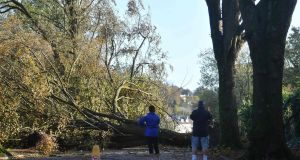 Households and businesses affected by Storm Ophelia should be covered by their insurance because “nobody is in a hurricane zone”, the Taoiseach has told the Dáil.

Leo Varadkar said every policy is a little different. People should read them carefully and “make contact with their insurer sooner rather than later so that a damage assessment can be carried out.”

But he said “we do think this will be a little different” to flooding incidents.

He said when severe weather causes flooding people find themselves uninsured either because they are in a flood zone or have been flooded previously.

Storm Ophelia was difference because “nobody is in a hurricane zone”, he said.

The Taoiseach also said the Government would engaged with the insurance industry in the coming days.

He also said assistance was coming from Northern Ireland, from Britain through Scottish Power and from France to assist the effort to restore power.

He said a further 11,000 had been reconnected on Wednesday morning and 125,000 remained without electricity.

The Defence Forces now have two chainsaw teams deployed and are operating a 10,000m water storage tanker in Co Kilkenny, parts of which have had no water since the storm struck.

In addition, two Air Corps helicopters have were flying over affected zones to assist the ESB in locating fallen lines.

The Army is helping HSE staff to get to work in Kilkenny and to clear routes in Cork and Kerry.

Fianna Fáil finance spokesman Michael McGrath had called on the Taoiseach to re-assure people that everything possible was being done to restore power and water supplies.

He also expressed concern that insurance companies might use the current situation as a means to justify premium increases.

He questioned why there was no update on the State consumer watchdog website about the situation.

Mr McGrath said a greater effort is needed to provide information to consumers about their rights and entitlements and encouraged to read their policy documents and booklets.

People needed to be assured that “acts of God” were covered in such a situation.

He said in the case of bigger claims, those affected should be reminded that if they are hiring loss assessors, they should use the services of companies regulated by Central Bank of Ireland.

Mr McGrath said the State should be informing people about their rights and entitlements.

The Taoiseach agreed people should carefully read their insurance documents and make contact sooner rather than later.

But he reminded the House that insurance policies should be covered because nobody lived in a hurricane zone.