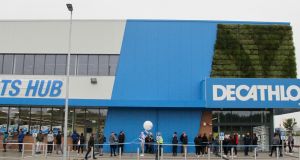 Some of those queuing outside Decathlon’s new outlet in Ballymun Dublin on Saturday. Photograph: Ronan McGreevy

If only queuing was a sport, Decathlon might add to its list of accessories, along with the 72 other sports it caters for in its Ballymun flagship store.

The spectacle of Irish people patiently and, of course, socially distancing in queues has become commonplace in recent days. We could enter a team in the Olympic games and stand a chance of winning a gold medal.

And we have had plenty of practice lately - when you have been locked down for months, maybe even queuing seems like an interesting activity.

By the time Decathlon opened its doors at 10.30am there were upwards of 500 people waiting outside forming a line around the outside of the building and through the indoor football pitch which will open in the coming weeks along with the basketball court, the outdoor gym, the climbing wall and the cycling track. This is one shop that parents will not have to drag their children to.

People clapped and cheered, and that was just the staff who came out a few minutes before opening time to greet the early arrivals. Then, inside, they clapped the first 150 customers through the door.

Decathlon’s English-born manager Kieran O’Shea waved his arms about to ratchet up the enthusiasm level. He says the company looks for “vitality and responsibility” more than anything in its staff.

His name comes from his Irish-born grandfather. “I hope I’m doing him proud. He would be here today but for Covid-19 restrictions,” he said.

You would think the 67 employees owned the place and to a certain extent they do, explained the company’s Irish chief executive Bastien Grandgeorge as they all have shares in Decathlon.

He said Decathlon is here to stay in Ireland as they have bought, not leased, the site in Ballymun, investing €13 million in the 4,000 square metre store. “I know. I spent the money,” he added.

It as a three-year project to open its first shop in the Republic, which was due to be completed in April, but the opening was postponed because of the Covid-19 pandemic.

Decathlon is called the “Ikea of sports” and its location beside Ikea is no accident. Decathlon is betting that, having spend hours in one vast windowless retail emporium, the enthusiasm of customers will not be dimmed for another one next door.

Decathlon has also borrowed many of Ikea’s techniques from - it designs and sells its own equipment, piling it high and selling it cheap.

Almost everything in stock is own-brand so customers looking for club football shirts or branded runners, the biggest sellers in other sports shops, will have to look elsewhere.

Reese Doyle from Ballyfermot decided to come on a whim and was well pleased with his Triban hybrid bicycle which cost €260. “I was inside my house today and I said I had nothing else to do. I haven’t had a bike in about 10 years. I need one for work. I can’t rely on the buses,” he said reflecting the views of many people who are now switching from public transport to cycling.

Michelle Kueirozdesa, a Brazilian native, was first in the queue. She arrived with two friends before 8am. “We thought they were going to open at 9am, but it was good to get here early. We are looking for some weights and stuff like this.”

Karen Wright arrived just before 8am with her daughter Noorsalem (11) to buy equestrian gear.

“We live locally. It’s wonderful that a whole new generation of people will associate Ballymun with something so positive,” she said

Decathlon has big plans for Ireland. It plans to open new outlets in Cork and Galway with a view to opening a total of between six and nine shops in the Republic of Ireland, in addition to the outlet it already operates in Northern Ireland.