Opening Ireland’s schools: Government accused of ‘getting ahead of medics’ and ‘scaring' people 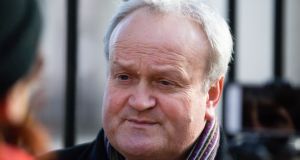 Teachers have accused the Government of “getting ahead of the medics” after Minister for Education Joe McHugh indicated there are plans to fully reopen all schools by September using “class bubbles” with no requirement for social distancing between pupils.

The new drive for a resumption of full-time education will mean a radical departure from current public health advice. Mr McHugh has insisted the guidelines, to be published later this month, will not put the health of school staff at risk.

But on Saturday general secretary of the Association of Teachers Union Ireland (Asti) Kieran Christie said: “With the greatest respect to Minister McHugh, I’m not aware he has medical expertise. ”

Asti would work with medical experts in getting school reopened safely, he said, speaking on Saturday with Cormac Ó hEadhra on RTÉ Radio One. “We certainly will not accept a situation where the minister, on this occasion, has gotten ahead of the medics,” he added.

“There is no medical advice supporting what he came out with [ON FRIDAY]. It is as simple as that.”

The minister had been “congratulating himself” on achieving consensus over the cancellation of Leaving and Junior Cert exams, but he would not get any consensus on reopening schools if he continues “musing aloud in the absence of any medical advice”, Mr Christie said.

“Teachers and parents simply won’t wear that,” he added.

A Department of Education study brought to Cabinet on Friday argued even if the current two-metre distancing requirement was reduced to one metre, primary school students would still only be allowed to attend school for 2½ days out of five.

In secondary schools, certain year groups would be able to attend only 50 per cent of the time. Under the current two-metre rule, pupils in primary schools could only attend one day a week, while secondary students could attend for two days.

Mr Christie said Department of Education officials briefed the teachers’ union as recently as Friday that it was ruling out the use of face coverings in schools when they do reopen.

“It is very difficult to pin anything down here,” he said.

Sinn Féin’s Pearse Doherty accused Mr McHugh of “scaring the bejaysus” of people with a suggestion that students could not fully return to school after the summer under social distancing rules.

The minister sparked “complete confusion and complete anxiety” with his remarks while the government had “absolutely no plan” for reopening education, he told RTÉ Radio One.

“What minister Joe McHugh said was completely incoherent, it was contradictory ,” he said.

Mr Doherty said the minister was supposed to announce a plan - three months after schools had shut down - for getting children back to classes in September, but instead only voiced an “ambition”.

“What the minister did yesterday was scare the bejaysus out of people,” he said.

There has been no government engagement with individual schools and teachers and headmasters “don’t have a clue what is coming down the line”, he added.

Martin Heydon, chair of Fine Gael parliamentary party, suggested all students could return to school in September without any social distancing rules in place.

“I’m saying we look at the model, like we have done with the pre-school area, where it was accepted that the the one metre and two metre [distancing rule] wasn’t workable and that we come up - with the public health experts and with all the stakeholders, the teachers, the parents and the students - with a tailored approach that suits that mechanism,” he told RTÉ Radio One.

Defending Mr McHugh’s announcement on Friday that social distancing in schools would mean hundreds of thousands of pupils not being able to attend, Mr Heydon said the government has “time to plan” between June and September for all students to return after the summer.

There would be “much more clarity” on the plans in “two to three weeks time”, the Kildare South TD said.