Q&A: The what, why, when of the Ryanair dispute

Irish-based pilots have called a one-day strike for July 12th, and cabin crew in Europe plan industrial action in July 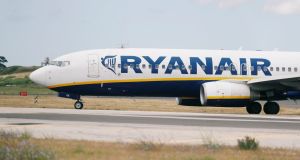 Where are we now with the Ryanair dispute?

We are potentially in a worse place than we were at the beginning of the week, and the holiday plans of thousands of Irish people are still up in the air as time runs out to reach a resolution in the dispute that has seen the airline’s Irish-based pilots call a one-day strike for Thursday, July 12th.

Meanwhile cabin crew in Italy will hold a 24-hour strike on July 25th, and crew in Spain, Portugal and Belgium will strike for 48 hours on July 25-26th.

I am due to fly on the 12th. Is my flight affected?

It is too early to say. There is just under a week to go before the strike, and both sides would most likely prefer to avoid it so you might get lucky.

But surely all flights will be grounded if the pilots are on strike?

Perhaps not. The nature of Ryanair’s employee network means that many flights could still take off. Some pilots are employed directly by the airline. Some are contractors and - effectively - self-employed. Of the airline’s 300 or so pilots operating out of Dublin, just over a third voted for the industrial action. However, those who have voted for the action are all captains and are essential to operate aircraft.

So when will I know if I am caught up?

If a stalemate persists, Ryanair will have to make alternative arrangements and it will have to start cancelling flights out of Ireland on the day of the strike. It has pledged to contact customers next Tuesday should the July 12th strike go ahead.

What is behind the airline’s summer of discontent?

The Irish pilots have called their strike in a dispute over pilot seniority. More than 100 Ryanair pilots based in Dublin who are also members of the Irish Airline Pilots’ Association (Ialpa) have voted in favour of industrial action as they seek an agreement covering base transfers, promotion, annual leave and other issue governed by length of service.

And what about the cabin crew?

Cabin crew are angered that they have to pay for their own uniforms and the water they drink on board, and they have complained about the pressure the airline places on them to sell snacks, drinks and gifts to passengers.

They are seeking a living wage, stable rosters, base transfers, promotion and disciplinary procedures that are not tied to in-flight sales. And they want contracts based on the laws of the country in which they are employed and an ultimate end to working for agencies rather than Ryanair itself.

What does Ryanair say?

It said earlier this week that cabin crew earned up to €40,000 a year, double the living wage, and work a fixed five-day-on, three-day-off roster, while they do not fly any more than 900 hours a year. It also pointed out that crew get a €400 uniform allowance, industry-leading 10 per cent bonuses for on-board sales, sick pay and paid and unpaid leave “as they wish”. And when it comes to Irish pilots there does not seem to be much by way of agreement.

What do you mean?

The two sides can’t even agree on a meeting venue. A disagreement between the union and Ryanair over a venue for a meeting is hampering any possible resolution to the dispute. Ryanair wants to meet in its headquarters near Dublin Airport, while Ialpa wants it to take place in a neutral venue. Ryanair is against this as it says holding the meeting at a neutral venue would create a “media circus”.

I thought that Ryanair was fiercely anti-union?

It was - in fact it probably still is, but times change. For many years it refused to negotiate with unions, but in recent months it has been forced to change its policy and accept the reality of collective bargaining as pilots have grown more powerful as their skills have become more in demand.

What do I do if my flight is cancelled due to the strike?

Under EU Regulation 261 airlines must offer passengers affected by cancellations a full refund or a rerouting on the next available flight or at a later time that suits the passenger. If you opt for a refund the airline’s responsibility to you ends. If you ask to be put on the next available flight then the airline must provide care and assistance until you can be accommodated on an alternative flight.

What does care and assistance mean?

What happens if my flight is not cancelled but I face a long delay?

If you are facing a delay the airline must also provide you with care and assistance. If you are left hanging around in an airport it must cover reasonable cost of meals and refreshments. If your flight is delayed by more than five hours an airline must offer you the choice of continuing with your journey or a refund of the cost of your ticket.

What happens if my outward bound flight is cancelled but my return flight isn’t can I get a refund on both legs?

If I am overseas and can’t get home, what can I do?

If the airline does not provide the care and assistance it is legally obliged to at the moment you need it, you should make your own reasonable arrangements and retain all receipts and use them to claim back the reasonable expenses.

What if I can get a flight with another airline that gets me how sooner?

There has been a change in tone across airlines in recent months and where once they would not allow passengers facing long delays book with other airlines they tend to do so now but you should always check with Ryanair that the will cover the cost retrospectively and get that in writing.

How do I claim back expenses?

Passengers should send copies (it is very important the original documentation is never sent in case it goes missing) of all receipts to the airlines on which they booked flights. Submissions should also include booking references, passenger names, original and new flight details. Keep spending costs low. The airline has a claim form on their “Contact us” page. To claim your expenses, you have to provide the flight number, date of the delay or cancelled flight and proof of your expenses such as photos of receipts, PDFs etc.

What happens Ryanair rejects my claim?

It is not the end of the road and you can appeal to the Commission for Aviation Regulation.

Am I covered by my travel insurance?

It is possible but not likely. Most policies have a get-out clause and don’t cover industrial action.

Am I entitled to compensation outside of reasonable expenses from Ryanair?

That is most unlikely. If you are affected by flight cancellations or long flight delays as a result of this strike action and seek compensation it is only likely to be granted after an investigation.