Q&A: Dublin’s new bus lanes and how they will affect you

€2bn scheme will halve some journey times but affect more than 1,000 homes 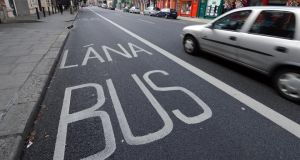 Key Dublin public-transport routes are to be overhauled under the €2 billion Bus Connects scheme published today, which the National Transport Authority says will almost halve some commuting times.

The report also says a new ticketing system will allow passengers to pay their fares more easily, using credit cards and mobile phones, as well as speeding up boarding times. Fare structures will be simplified and allow for easier movement between different transport services without the current financial penalty.

But the 16 new high-speed routes are to affect more than 1,000 homes in the city. The changes, which are part of the Bus Connects scheme, involve 230km of expanded bus lanes and 200km of cycle lanes being built within a decade. Residents will lose gardens and parking places, and some sections of footpath will be narrowed.

Where are the new routes?
To the city centre from Ballymun, Blanchardstown, Bray, Clongriffin, Greenhills, Kimmage, Liffey Valley, Lucan, Rathfarnham, Ringsend, Swords and UCD via Ballsbridge; plus Blackrock to Merrion, Clondalkin to Drimnagh, Finglas to Phibsborough, and Tallaght to Terenure.

Will I lose part of my garden, and where can I see a detailed map?
The National Transport Authority has said this level of detail will be worked out over the summer. The authority has published 16 “corridor” routes that indicate roads but not individual properties. This is a discussion document, it said. But the authority has identified pinch points, where more space is needed. These include routes through Templeogue, Terenure, Rathmines, Ranelagh, Portobello, Rathfarnham, Ranelagh, Kilmore on Malahide Road and Santry.

Roughly how many gardens will be affected?
About 1,300. Chief executive Anne Graham said the scheme will landscape new gardens, plant new mature trees, build new gates and walls, and pay property owners “tens of thousands” of euro in compensation.

When will I know if my garden is being earmarked?
Hugh Creggan, deputy chief executive, said property owners will be told before the publication of a more detailed appraisal, in September or October.

How much of the €2 billion cost will be spent on compensation?
Ms Graham said a “significant amount” but declined to specify.

How many buildings will be subject to compulsory purchase orders?
None.

How narrow will footpaths become?
Footpaths will be at least wide enough for two wheelchairs to pass each other.

How far out do the routes go?
The longest are routes from the city centre to Swords; Lucan and Bray.

Which gets to be built first, and what is the timeline?
The authority said it does not yet know which route will be developed first. The timetable is to have detailed maps by October this year, with planning permission from An Bord Pleanála by 2020, and for the first routes to be under construction by 2021.

Is the authority not worried that legal challenges will hold this up for years?
No, said Ms Graham.

What if this doesn’t happen?
The city will “grind to a halt” with lengthening bus travel times, difficulties getting to work, and an “impaired investment culture”, according to Ms Graham.

So does this only affect Dublin?
No. A similar scheme is ready to go in Galway. In Cork more work is being done on the detail.