Up to 20,000 to see holiday plans disrupted as ‘WB Yeats’ sailings in August cancelled 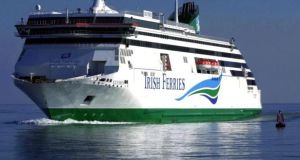 Irish Ferries has cancelled about 6,000 bookings on the ‘WB Yeats’ in August. Photograph: Eric Luke

Up to 20,000 people travelling to France later this summer have seen their holiday plans thrown into disarray after Irish Ferries cancelled all bookings for August on its new WB Yeats ferry.

The company said around 6,000 individual bookings were affected by the cancellations but with many of those bookings covering a family and some coaches, the number of people impacted is significantly higher with a company spokesman confirming it would hit the travel plans of at least 19,000 people.

It is the second time in as many months Irish Ferries has been forced to cancel thousands of bookings. It cancelled all bookings on the WB Yeats for more than two weeks in July at the end of April.

The company has again blamed “extraordinary circumstances beyond its control”, and said the delivery of the WB Yeats had been further delayed by German shipbuilder FSG.

“Because of the uncertainty caused by this additional delay, Irish Ferries has no option but to cancel all the planned sailings to France for WB Yeats this summer,” the company said in a statement on Tuesday.

The WB Yeats now likely to commence sailing with Irish Ferries on the Dublin to Holyhead route in September.

Irish Ferries said it was contacting affected customers on Tuesday to inform them of the cancellations and to offer them alternative travel options as well as an apology for the disruption to their travel arrangements.

Customers affected will offered a number of alternative travel options including alternative direct sailings on the Oscar Wilde, or a “land-bridge” which would seem them sailing to the UK (from either Dublin or Rosslare) and then on to France.

Have your say: Are you affected by the Irish Ferries cancellations?

If alternative travel arrangements do not suit, customers will, be entitled to a full and immediate refund of all monies paid.

Irish Ferries was previously forced to cancel July sailings for the WB Yeats when they were informed in April by FSG, of a delay in completing work on the ship.

Approximately 2,500 bookings were impacted by the earlier cancellation with 95 per cent of those choosing to switch to Irish Ferries’ other cruise ferry, the Oscar Wilde.

“Irish Ferries very much regrets the inconvenience these cancellations cause our customers and hopes that as many as possible will choose to be accommodated via the company’s alternative arrangements and continue with their holiday plans,” the company said in a statement.

It is offering affected customers a €150 voucher which can be used on any of its Ireland-France routes next year.

The Irish Ferries managing director Andrew Sheen said the company felt “very disappointed and very let down” by the shipyard.

He told The Irish Times that it had been informed via email on Monday that the delivery date of July 13th would not be met as a result of delays connected to sub-contracted electrical works.

The delays meant Irish Ferries would not have time to carry out the necessary safety checks before the end of the summer sailing season.

“All we can do is apologise at this stage,” he said. “We are accountable but we are not the ship builder, we do not build ships.”

He said that over 90 per cent of the impacted passengers would be accommodated on the Oscar Wilde without difficulty adding that the landbridge option might suit other passengers better.

He said some compensation claims had been already come in in connection with the previous raft of cancellation and that he anticipated more claims would come in as a result of the new cancellations however he said he could not comment on the likely financial impact situation would have on the company.

The €147 million ferry was due to start servicing routes from Ireland to France and the UK in July and had been billed as the largest and most luxurious such vessel to shuttle passengers to and from Irish ports.