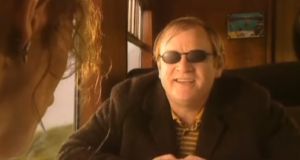 A question on the film Cáca Milis appeared which asked students about about the main character’s effect on the viewing audience. Photograph: Irish Film Board/Youtube

Students who banked on a widely-anticipated short story appearing in the higher level Irish paper prose section got a surprise today.

The story, An Gnáthrud, did not feature. Instead, a question on the film Cáca Milis appeared instead which asked students about about the main character’s effect on the viewing audience.

Overall, the consensus from most teachers was that this was a challenging paper with complex vocabulary that tested even the best-prepared students.

The first comprehension section - question one - dealt with stories that came from the census.

"While it was topical, it was also historical in content and referred back to the time of Mary and Joseph in Bethlehem. “Despite this it was a very doable comprehension,” Ms Grealy said.

John Gavin, an Irish teacher and founder of Leavingcertirish. com, said while the questions were fair, the section would have tested plenty of students.

“The term ‘breischéim na haidiachta’ in the grammar section was challenging ...the answer was ‘níos fearr’, but only the best-prepared students would have recognised the technical term used in the question,” he said.

The second comprehension question focused on celebrating cultural heritage and the Irish language.

“This is a topic students are familiar with. It was nice and straight forward- the vocabulary was easy to understand and should have posed no major difficulties,” Ms Grealy said.

However, Mr Gavin said while the topic was a familiar one, the technical vocabulary would have posed difficulties for many.

“It would have challenged even the very best students, but I would expect that the majority of students got through it. The key issue for students is that it would have taken quite a bit of time to complete and might have stretched their overall timing to the max,” he said.

Mr Gavin said the literature questions were very fair overall, but the question on Cáca Milis may have put a few students off at first glance.

“It focused on the main character’s effect on the viewing audience, which wouldn’t be the most typical angle that students address questions on this short film,” he said.

Emer McTernan, an Irish teacher at Jesus and Mary Secondary School in Enniscrone and subject expert with Studyclix.ie, agreed that it was a testing question.

"Students would have found  the questions here challenging as they were asked to reflect on whether the protagonist Paul, a disabled blind man, deserved the pity of the audience," she said.

In the poetry section - question three - some students may have been disappointed by the appearance of An Spailpín Fánach. Ms Grealy said it is one of the least popular of the prescribed poems.

The questions, however, were “very manageable”, she added.

Ms Grealy said most students could have opted for question ‘A’, An Triail, which focused mainly on characters, and those that showed little kindness or compassion to Máire.

The dánta breise section - question ‘F’ - dealt with the love a mother has for her family and the anxiety she has in relation to them.

“It was very similar to the question that appeared on the same poem in 2012,” Ms Grealy said

There was a mixed reaction from students.  Saoirse McGowan, a higher level student at Jesus and Mary Secondary, Enniscrone, Co. Sligo, said the comprehensions had difficult vocabulary but the questions were approachable.

"We had studied Bliain na Gailege in class so I had known information about this before doing the comprehension and I also wrote my essay on this topic yesterday toom" she said.

"I had hoped Gnáthrud and Mo Ghrá sa would come up as they appeared on our mocks but Cáca Milis and Spailpín Fánach were on today’s paper. The Cáca Milis question was tough the way the question was asked as it was specific and the questions for Spailpín Fánach were straightforward and nothing we haven't covered or seen before. I found the Maidhc Dainín question nice and general.”

“There was nothing out of the ordinary on the literature section. Overall, a very fair and balanced paper that most students should have been very happy with,” he said.