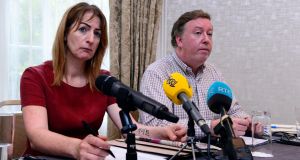 Independents 4 Change TD Clare Daly with Paul Redmond of the Coalition of Mother and Baby Home Survivors at a press conference at Buswells Hotel, Dublin on Tuesday. Photograph: Cyril Byrne

The Coalition of Mother and Baby Home Survivors are planning to protest during the visit to Pope Francis to Ireland next August, founder member Paul Redmond has said.

“The fact of the matter is that the whole adoption machine was run by the church over the years and they cared little or nothing for the law of the land. As far as they were concerned they were doing God’s work, canon law superseded everything and they played hard and fast with the rules across the board,” he told a press conference in Dublin on Tuesday.

On Monday the survivors’ group met Minister for Children and Youth Affairs Katherine Zappone who “promised action and legislation by this autumn,” he said.

They would like to see “a Garda unit, properly resourced, proactively going after what evidence is left of the criminal behaviour that was involved, baby trafficking, child abduction, and all the rest of it in this country for generations. These were crimes, serious crimes,” he said.

He accused the religious congregations involved of “basically extorting, bullying and blackmailing government by refusing to hand over their records until they receive a legal indemnity for past crimes and the Government should simply not be giving these indemnities” as “it means they are able to wash their hands like Pontius Pilate and walk away from years of crimes and that is absolutely outrageous”.

He noted the nuns involved in running the Magdalene laundries were asked for a contribution to the redress scheme covering those institutions but “they just turned around and went ‘No. We’ve got our tens of millions’.”

He added: “The Bons Secours who ran Tuam [mother and baby home] are one of the biggest providers of private health care in this country and won’t put their hands in their pockets, won’t help in any way.”

Mr Redmond said the survivors’ group “had several meetings with Archbishop Diarmuid Martin and his response has been appalling”. They had “officially applied for a meeting with the Pope. He [the Archbishop] hasn’t even the manners to answer us.”

In addition, Archbishop Martin “was sent a report in 2013 about all these matters, an 8,500 word report about three mother and baby homes which was signed for at his front door and marked private and confidential and personal, and he claims he never got that. His vice chancellor was sent a copy by ordinary post. He claims that was lost in the post. We’re sick of dealing with these people.”

Mr Redmond said “for all the focus here today on what the Government is or is not doing, the church are getting away with this scot free... We are letting them away with it”.

In a statement to The Irish Times, the Dublin Archdiocese said: “Archbishop Martin has been consistent in calling for a thorough investigation of the history of adoption in Ireland over the years.

“The Archdiocese has provided information from the Diocesan archives to the Commission of investigation into Mother and Baby Homes, some of which is relevant to adoptions.

“There have been hundreds of letters of request to meet Pope Francis - these have been referred to the World Meeting of Families’ for consideration and response.”

Mr Redmond said his was “a dying community”, and he appealed to the Government to “face up to all these issues now and do the right thing by our community. Ireland’s history needs to be cleaned up and we need to do it now.”

The press conference was also attended by Sharon Lawless of TV3’s Adoption Stories and Independents 4 Change TD Clare Daly, who hosted it.

Ms Daly said that, in the context, “a limited scoping exercise will not be sufficent” where illegal adoption in Ireland was concerned. The practice had been “widespread and too many people need answers and that is the least that can be done for the people who have had their families separated and their identies stolen,” she said.

1 Family visits to be permitted over two-week period at Christmas, says Varadkar
2 Shops, hairdressers and hotels expected to reopen next week
3 Carlow school principal denies girls were told not to wear revealing clothes
4 Almost 15% of Irish adults have been raped, study finds
5 400 – yes, 400! – Irish retailers for all your online Christmas shopping
Real news has value SUBSCRIBE