Charlie Chawke says measures to cost €40,000 per pub and warns of future viability 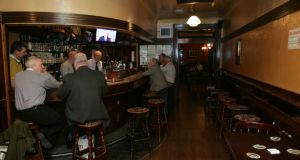 Mulligans of Poolbeg Street is among the 7,000 pubs countrywide that have been closed since the pandemic began. File photograph: Aidan Crawley/The Irish Times

Publicans who flout the guidelines aimed at suppressing the coronavirus pandemic when they reopen their doors next week face losing their licences in September, the drinks industry has warned.

The State’s 7,000 pubs have been shut since March due to the coronavirus pandemic. But those capable of fulfilling criteria outlined in a 22-page document assembled by Fáilte Ireland will be permitted to reopen on Monday.

The criteria includes food service, a time limit of 1¾ hours on the premises for patrons and a requirement to record their identities for a month for contact tracing.

A Vintners’ Federation of Ireland (VFI) spokesman, which represents about 4,000 publicans outside the greater Dublin area, said about 40 per cent of its members will open on Monday.

The Licensed Vintners Association (LVA), which is the representative body for Dublin pubs, said it expects 50-60 per cent of establishments in the capital to open at some point next week. That would equate to 350-450 pubs.

The LVA and VFI have both warned that pubs which reopen and fail to abide by the guidelines will face difficulties renewing their licences in September.

LVA chief executive Donall O’Keeffe said: “Those pubs that don’t follow the guidelines will deservedly suffer serious damage to their reputations . . . They also risk losing their licence when it comes up for renewal in September.”

The VFI spokesman said many pubs will remain closed for fear of flouting the guidelines. “These publicans would have a number of concerns about their ability to enforce the guidelines,” he said.

“Some publicans are anxious to avoid a situation where they are refusing regular customers who don’t wish to purchase a meal.”

Well-known pubs that will not reopen until July 20th include: the Stag’s Head in Dame Court; the Palace Bar in Temple Bar; the Swan in Aungier Street; and Grogans Castle Lounge on South William Street.

Industry sources said on Wednesday there is considerable unease among publicans in relation to the guidelines, particularly given the lack of notice businesses have been provided with to prepare for implementation.

There is also said to be “significant concern” in the industry that some publicans will reopen and ignore the guidelines, thereby damaging the sector as a whole and potentially leading to stricter rules down the line.

However, sources also insist there is a strong desire among publicans to get the industry back up and running and a reluctant acceptance among most that they must fall into line.

In terms of the emphasis on personal responsibility of businesses to implement the guidelines, sources said that publicans are used to dealing with large – and sometimes unruly – crowds and are, therefore, equipped to cope.

In terms of the most challenging aspects of the guidelines, the VFI said the 1¾-hour time limit would be the most difficult to deal with. Others said the necessity to keep records of customers’ identities would be demanding.

Charlie Chawke of the Chawke Pub Group told The Irish Times that the requirements would cost his business in the region of €40,000 per pub. And he added that if business is not restored to normal by Christmas, the viability of his group would be in danger. The group comprises nine pubs including the Old Orchard Inn, Goat Bar and Grill, Searsons and the Bank Bar in Dublin. All are set to reopen on Monday.

“We have all the equipment that we need in place and we will meet all the requirements,” said Mr Chawke. “The guidelines are very comprehensive, but if we want to open we have to do what we have to do. We’ll comply as best we can.”

In terms of the cost involved, Mr Chawke said: “We’re going to be hit very heavily. It could be 40 grand per pub. Trade will be down as well of course with social distancing measures. If we don’t get back to normality by Christmas, then our viability will be in danger. We’ve done an amount of upgrading during the lockdown, staff have been retrained [and] that’s an ongoing process. We have our own health people advising us.”