Catching the worm: A look into the heart of the scientific process 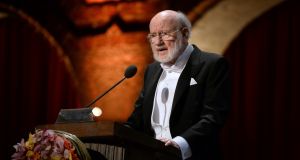 The stuff of great science is invariably an infuriating mix of chance; observation, much graft, frustration in trying to get experimentation right to deliver reliable results and replication. And if you are lucky, there is dramatic progress and an ultimate breakthrough that contributes to knowledge and perhaps even the benefit of humanity.

The scientific endeavour of William C Campbell, Ireland’s only winner of the Nobel Prize in physiology or medicine, is notable for all those elements, book-ended by frustrations and triumphs which he calmly embraces, while always retaining his focus on pushing on to the next stepping stone of discovery.

His memoir, published by the Royal Irish Academy, captures the essence of that in a few paragraphs:

“For me the wonderful thing about this process of going from a soil sample to a chemical agent that can reduce the burden of disease is that while it was an incredibly complex and technically difficult endeavour, it originated in a very simple experiment. Complexity was built on simplicity. That is a critical lesson.

“We fed that mouse an unknown amount of an unknown substance that might not be there, and we watched what happened. From that experiment we found the key to what became a blockbuster anti-parasitic drug.”

He admits it was quite a jump to take a drug that treats heartworm in dogs and use it to treat river blindness in humans. But it wasn’t done in one giant leap; “it was a series of insights and hunches that slowly but surely joined the dots and, just as in the discovery of ivermectin itself, it involved many people with different backgrounds and a deep understanding of basic biology”.

Perhaps the most unexpected bit is winning that Nobel Prize in 2015 when aged 85 and well into an enjoyable retirement. “The Nobel news brought me rapidly back out of it, and I soon discovered that being a Nobel laureate is not for the faint of heart. Since then I have been kept busy, perhaps as busy as before,” he recalls.

He won the Nobel Prize with Japanese scientist Satoshi Omura for work in defeating the roundworm, which causes tropical diseases including river blindness affecting millions of people in developing countries, notably in Sub-Saharan Africa. More than 50 per cent of adults in African village communities were being infected, which triggered migration away from fertile areas because of their link with waterways.

They shared the prize with pharmaceutical chemist Tu Youyou, the first female Chinese Nobel laureate. It was awarded for their discoveries leading to therapies against parasitic diseases.

The drama went beyond the lab when in 1987, nine years after Campbell first floated the idea, his employer (of 33 years) Merck Research Laboratories announced it would distribute ivermectin without charge wherever it was needed. With help from the World Health Organisation and many NGOs, it helped to combat “forgotten diseases of forgotten peoples”.

How the veterinary form of ivermectin was discovered is an incredible story in itself. In the late 1960s Omura, a microbiologist at Tokyo’s Kitasako Institute, was hunting for new antibacterial compounds and started to collect thousands of soil samples from around Japan. He cultured bacteria from samples, screened the cultures for medicinal potential and sent them 10,000km away to Merck labs in New Jersey, where his collaborator Campbell tested their effect against parasitic worms affecting livestock and other animals.

One culture was remarkably effective, a new bacterial species Streptomyces avermictilis. The active component named avermectin was chemically modified to increase its activity and safety. The new compound, ivermectin, became an animal health product in 1981 and soon was a top-selling veterinary drug. In spite of decades of searching, it remains the only source of avermectin ever found.

Campbell’s early education was in the converted attic of his home in Ramelton, Co Donegal. His father, a Presbyterian, local shopkeeper and vendor of farm supplies, employed a live-in tutor Miss (Elizabeth) Martin. There was never a mention of science but she infused in him a liking for words and knowing things.

The spark of scientific curiosity was fired-up at Campbell College boarding school, where he struggled with physics and chemistry; “biology, though, was what saved my bacon”, thanks to the inventive and engaging approach of teacher Robert Wells.

A leaflet on liver fluke disease picked up from an agricultural fair on a school outing was his first introduction to the world of helminthology – the study of parasitic worms and treatments against them though the true significance of that emerged later.

He went to Trinity College in 1948, having switched at the last moment from medicine to natural sciences. Ireland’s only other Nobel laureate in sciences, Ernest Walton, singularly failed at teaching him physics – “no fault lay at his feet, though for my difficulty in grappling with ‘hard sciences’.” More significantly, the renowned parasitologist JD Smyth fostered his life-long interest in parasitic worms. It led to a PhD in the University of Wisconsin-Madison and a career with the pharmaceutical company Merck in the US – he still lives in Massachusetts.

His career is outlined in beautifully measured writing, and marked by qualities of restraint and humility – the science matters most and it’s a team game. Curiosity is to the fore rather than compassion, but that is not to say the latter is absent. He is great advocate of crossover between the sciences, arts and philosophy as a proven practitioner of art and poetry.

He developed an interest in painting as a recreation that was to become an expression of his scientific fascination with parasites. It did not come out of the blue. As a student of zoology in Trinity he would draw complex diagrams of skeletal and anatomical structures. It was how he committed to memory “the bones of the gannet and the skull of the Tasmanian devil”.

Campbell makes a powerful case for drug discovery that has a place for empirical research – unfortunately regarded as “old hat”. While he feels its demotion was to the detriment of his career in the end, more importantly it has been to the detriment of global health.

Irish Times science contributor Dr Claire O’Connell, who wrote the book with Campbell, says she has always admired his modesty and attention to detail. “I think it is good to tell the stories of scientists and science. Last year, I was at the World Conference of Science Journalists in Lausanne, Switzerland. A theme that kept coming up was the importance of reporting on the process of science as well as the discoveries.”

What comes through in Catching the Worm is sometimes it takes a long time to make discoveries and figure out how they can be applied, she notes. “In the case of ivermectin, it took a large team of people working together with different backgrounds and insights, and careful checking all along the way. Bill described how you wouldn’t let yourself get too excited when an experiment had a good result – it was welcome news but there was often still a long way to go.”

O’Connell is acutely conscious of the importance of bringing human stories into science communication. “One of the insights that Bill offers in the book is when things perhaps aren’t panning out quite as you expected, to keep working on what interests you and on what you love to do. I’ve been thinking about that quite a bit during the Covid-19 pandemic, and finding solace and purpose in writing about science and about scientists.”

Coinciding with his 90th birthday and publication of his memoir, the RIA and the RDS will present the Catching the Worm podcast – William C Campbell in conversation with Prof Luke O’Neill of Trinity College and Dr Claire O’Connell – on Sunday, June 28th at 8pm via www.ria.ie/catchingtheworm