Almost 20% of those working at home says they do not have suitable space, equipment 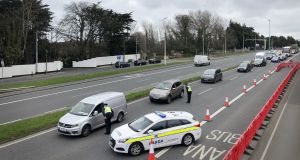 People are now significantly less likely to heed Government advice on Covid-19 than they were two months ago, a study by the Central Statistics Office has found. Photograph: Bryan O Brien/The Irish Times.

People are now significantly less likely to heed Government advice on Covid-19 than they were two months ago, but almost half the population remains concerned about how others are adhering to the rules, according to a new study.

In its latest "snapshot" on the social impact of the pandemic, the Central Statistics Office (CSO) also found that more than 40 per cent of people say they have put on weight since coronavirus restrictions were introduced.

Some 59.9 per cent of respondents rated their compliance with Government advice on staying safe, including on social distancing, as "high" in June, down from 80.6 per cent in April.

At the same time almost half (47.7 per cent) of respondents are "very" or "extremely" concerned about other people’s compliance, with women most likely to be so concerned (52.0 per cent compared with 43.2 per cent of men).

The youngest respondents, aged 18 to 34, were most likely to have "extreme" concern about how others are observing the rules (19.9 per cent) and this decreases up the age groups.

Younger respondents were most likely to worry about someone else’s health, with 23.3 per cent of 18 to 34-year olds "extremely" concerned, compared with 11.9 per cent of those aged 55 to 69.

Concern about personal health during the pandemic is decreasing - though not among women. Some 25.8 per cent of men and women reported being "very" or "extremely" concerned about their own health in April, but this fell to 21.3 per cent in June. The proportion of men concerned fell from 28 per cent to 17 per cent, but among women it increased from 23.7 per cent to 25.4 per cent.

Older people were more concerned for their own health than younger people, with 12.1 per cent of those aged 18 to 34 "very" or "extremely" concerned about their health in June, compared to 29.6 per cent of over 70s.

However, the over 70s cohort has seen the largest drop , from 42.5 per cent being "very" or "extremely" worried about their health in April.

Almost a fifth (19.6 per cent) of respondents working from home said they "don’t have a suitable workspace with adequate equipment" in their home.

Almost a fifth (18.5 per cent) of respondents were "very" or "extremely" worried about their employer’s ability to provide a safe working environment when they return and this was far more pronounced among women (24 per cent) than men (12.7 per cent).