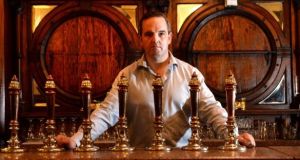 One of Dublin’s most prominent publicans has accused the Government of showing “total disrespect” to the sector over its reopening plans. Ronan Lynch, the owner of the Swan pub in Aungier Street, said the proposals as recently suggested for pub reopenings will make it difficult for him to reopen. When pubs in Dublin were able to reopen by serving a €9 meal, he was able to source pizzas from another business locally.

Those arrangements were able to keep his staff and staff from the local pizzeria in employment.

“We were using our entrepreneurial skills and now the Government is shutting the door on us. My business depends on this. I haven’t seen any data to back this up. We have seen no evidence so far.”

Proposals which would see only pubs that have their own chef and kitchen reopening would be unworkable for him, he claimed.

“When the pubs shut in March, we were asked to take one for the team and we did, but now it is clear that two governments, the old one and the one we have now, don’t care about us.”

Willie Ahern, the owner of The Palace Bar in Dublin’s Fleet Street, said it is difficult to see his pub reopening either as a result of the Government guidelines.

The Palace, one of the most famous Victorian bars in Dublin, said the proposals as currently mooted “are not great for the likes of us”.

He got in a pizza oven and sandwich bar, but does not have a chef. “We adopted and got on with it by adhering to all the guidelines.”

Mr Ahern said there were “a couple of messers” within the pub trade when the pubs were open, but the majority of businesses complied with the guidelines.

“We are getting kicked since March. Every week there has been something else. This could run into the spring or summer time. Can you imagine the Palace Bar not being open for Christmas?”

Last year, Paris Texas in Kilkenny city won Irish pub of the year. It specialises in American food and can seat 125 people when full. Owner Pat Crotty says he will certainly be opening up as soon as restrictions are lifted and has spent thousands getting his premises ready.

“I’m happy as a food operator to be opening again. It’s just so difficult to be sitting on your hands.

“I am very concerned with the length of time that we have been closed that food pubs are going to lose their skilled staff. We are 24 weeks closed this year. There are chefs going off to do other jobs.”

Galway publican Fergus McGinn said the reopening will be difficult for so-called “wet pubs” that don’t do food.

“It’s like the smoking ban when it came in. If you had a smoking area, it worked in your favour.”

“It will have to be restricted as regards numbers, but it is vital for people to get out and to socialise,” he said.