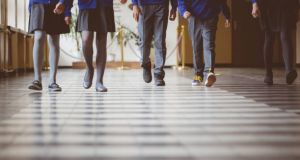 Carlow Presentation College has insisted its uniform policy has not changed in recent years.

The principal of a Carlow school has denied inappropriate remarks were made at assemblies last week during which female students were alleged to have been told not to wear tight-fitting clothing,

Female students were reminded of the regulations on uniforms, he told RTÉ’s Morning Ireland programme. The girls were spoken to, not the boys, because “the issue was primarily with girls”, Mr Murray said.

“Over the weekend, this blew up on social media based on unsubstantiated allegations,” he said, adding that the school does not want a “wrong message” to come through from the assembly.

Several parents reportedly complained about the message that was allegedly conveyed in a series of assemblies last Friday. But the school has insisted its uniform policy has not changed in recent years.

“Our PE uniform regulations has not changed at all despite what has been said on social media and elsewhere. The only change is that because of Covid-19 regulations when students have PE class they come to school in their PE gear rather than changing in and out of it as they would have done normally when we had access to changing rooms,” Mr Murray said.

“What was being noticed by staff, myself and others, over the last month and a half or so is that on PE day when the students were coming in, particularly the girls, the uniform regulations weren’t being followed and was becoming more of a fashion show more than anything else,” he said.

“There was a discussion with myself, the deputy principals and the deans of discipline in terms of how best to address it and it was felt that the simplest way was just to talk to the girls, in a sense to go through a reminder of what the full school uniform regulations are."

Some of the comments about the issue on social media “are scandalous in a sense and damaging to staff as well”, he said. “Primarily what was a normal enough assembly in terms of reminding pupils about uniform regulations has escalated into this.”

In the Dáil on Wednesday, Taosieach Micheál Martin said a report is being prepared for the Minister for Education on the controversy.

Mr Martin said he did not hear the interview on RTÉ with Mr Murray but added: “If the principal is challenging the report with the media then in fairness to this House we have to seek out the full facts before passing commentary on that.”

Mr Martin was responding to Solidarity TD Mick Barry who referred to reports “that girls in Presentation College Carlow have been told not to wear leggings to school because they are too revealing of their bodies and made teachers uncomfortable".

“I understand the principal was on the radio this morning to challenge the reports but clearly young people both male and female in the school are very upset and believe that something very wrong happened here,” said Mr Barry, who called for the Department of Education to investigate the issue. “There must be no place for victim blaming or body shaming in our schools.”

Mr Martin agreed but said they should get the full facts before passing comment.

Earlier, Mary O’Driscoll, chairwoman of the parents’ council at Presentation College, said the school held an assembly to reiterate the schools uniform policy to students after some students had taken it “upon themselves” to wear whatever sports pants they wanted contrary to the school’s uniform policy.

“With Covid, that rule was relaxed — as in they were allowed to wear their tracksuits into school on PE day.

“Their school tracksuit is basically plain bottoms with no logos. What’s happening, seemingly, lately — some students have taken it upon themselves to wear in leggings which are not part of the PE uniform.

“So as far as I’m aware — the assembly was held to reiterate the school uniform policy which they’re all aware of when they start school. They all sign up to the code of conduct.”

Asked whether students were told the reason for not wearing leggings was because it was distracting for staff members, Mrs O’Driscoll said: “I have spoken to a few people that were in those assemblies and they have told me that they weren’t told that.”– Additional reporting: PA