Gardaí say deaths of men not believed to be linked 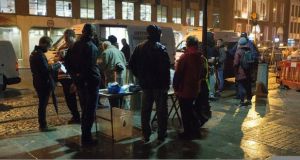 The bodies of two men were discovered in Dublin city centre on Wednesday morning.

One of the men, in his 40s, was found dead in a tent on Leinster Lane, in Dublin city centre, by a passersby at around 8.30am.

Around an hour later, a second man was found dead in an apartment on nearby Longford Street Little in accommodation understood to be owned by a charity.

Gardaí and emergency services were called to the separate scenes and the remains of both men were taken to the city morgue for postmortem examinations.

The Dublin Region Homeless Executive (DRHE) said it was awaiting more information on the circumstances of the deaths.

“It is important to emphasise the need to maintain confidentiality around these deaths and that these people deserve to be treated with dignity and respect in their passing,” it said in a statement.

Dublin Simon Community, which operates the rough sleeper outreach service, described two deaths in one day as “truly alarming”, adding: “We are shocked and deeply saddened by what has happened today. No one should be dying in homelessness.”

Dublin City councillor and chief executive of the Inner City Helping Homeless (ICHH) charity, Anthony Flynn, will table a motion at next month’s council meeting calling for “an end to the habitual residency requirement” that, he says, denies homeless people from outside the capital emergency beds.

This is a requirement that homeless people return to their own county or local authority to access service there. Services, such as the Mendicity Institution and the Dublin Simon Community, say this is forcing people to sleep rough.

Cllr Flynn will also call for the reinstatement of emergency beds - calling them “holding beds” - for people who are newly homeless but have not yet been accepted as homeless by the DRHE.

As part of its response to Covid-19 the executive eliminated 24-hour beds. Though this was welcomed as a more stable response to people’s needs, processing homelessness -assessments can take several days.

Louisa Santoro, director of the Mendicity Institution, said it was “one hundred per cent happening.

“I am getting tired of the gas-lighting from DCC. I have two young men in front of me, from outside Dublin, who have been sleeping in a tent for over a month because they have been refused emergency beds. If these policies don’t change today’s deaths will not be the end of it.”

Figures from the Department of Housing, Local Government and Heritage show that from the end of September 4,251 people were homeless in Dublin while nationwide the numbers totalled 6,073.

Earlier this month, a homelessness report carried out by the DRHE committed to “jointly carry out a detailed review of all deaths in homeless services this year”.

The total number of single adults in emergency accommodation has continued to increase, and in September this number was 2,994 according to the Council report.

The number of single adults presenting as homeless and using emergency accommodation for the first time has remained high. Figures from an eight month period show that in September 135 single adults used emergency accommodation for the first time; it was 134 in August, 176 in July, 105 in June, 123 in May, 99 in April, 108 in March, 160 in February and in January there were 215.

There has been some success in terms of single persons leaving emergency accommodation, with 89 single adults exiting to tenancy and 57 single preventions through new tenancies in September. In August those figures stood at 68 and 59.

The Council and HSE have also initiated a joint review on all aspects of how emergency accommodation facilities are operated on behalf of the DRHE in the city and a comparison of day-to-day management operations between the NGOs and private operators.

In the Dáil, Sinn Féin leader Mary Lou McDonald said “the scandal of street homelessness and rough sleeping must be dealt with and it needs to happen soon”.

She said she had heard the “very distressing news of the death of a man who lived in a tent close to Leinster House this morning. I express my condolences to his family and friends”.

Ms McDonald said she wanted to acknowledge his death because it was almost six years to the day since the death of homeless man Jonathan Corrie in the doorway of a house on Molesworth Street, just across the road from Leinster House.