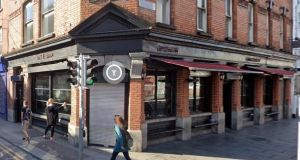 Dublin’s Dice Bar is to close for good. Photograph: Google

The dice have rolled for the last time for the Dice Bar, and the popular Dublin 7 pub, which has been filled with locals and feted by international media for more than 20 years, has pulled its last pint.

Pub operator Kieran Finnerty confirmed the move to The Irish Times on Wednesday.

He has run the bar on Benburb Street since 2000 but said a confluence of events that saw his lease run out just as the lockdown was starting in March and the impact of Covid-19 on the pub trade forced his hand leaving him with no choice but to close for good.

Dice Bar has been acclaimed in the international press over recent years with the Guardian describing it as a “fun and frisky bar” in 2016 in a piece that referred to Stoneybatter and its environs as a ”little Williamsburg by the Liffey”, a reference to the super-hip neighborhood in the New York City borough of Brooklyn.

And two years later , the New York Times painted a picture of a “lively corner dive with worn leather booths and a homey atmosphere”.

Mr Finnerty confirmed he will not reopen when the Covid-19 restrictions end and will instead look at finding somewhere new to ply his trade although not before he takes an extended visit to Cuba.

“The closure is down to Covid,” he said. “But the lease also ran out out on March 31st, and in a way that lucky I suppose. I could have spent the last few months bleeding cash.”

Mr Finnerty said his plan is “to open something again next year, and right now everything from the Dice Bar, all the fixtures and fittings, are in a shipment container down the country”.

He said he had no idea where the new venture might be but suggested he would not struggle to find a venue.

“I think the harsh reality is that in the new year, unfortunately, there will be a flood of places closing. I mean just look at Dublin today – it is as dead as Good Friday, and it has been like this for months. I don’t think it will be until next summer [a new venue], and I would like to see us open maybe somewhere close to where we are now.”

Mr Finnerty said he had missed the regulars who have been coming through the doors since the bar opened.

“But the thing is that the regulars from those days have all got older and maybe are not so regular any more. They might only come inn once or twice a year but they still come in and we have always been good at bringing in younger people.”

He said that what had been happening across the pub sector since the start of the crisis in March was “terminal and it will be terminal for so many pubs. This is not just us – it will be all pubs that suffer”.

“One of the people I regularly meet on the street outside the pub told me early in the lockdown that it takes 30 days to make a habit and 90 days to break it, and with so many pubs closed for a lot longer than 90 days you’d have to wonder how much of the habit has been broken now.”