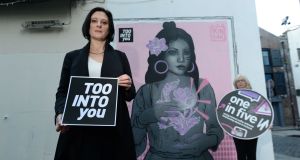 Women’s Aid chief executive Sarah Benson and Linda Smith, manager of the Women’s Aid 24hr National Helpline at the unveiling of a new ‘Too Into You’ Mural, at the Button Factory, in Temple Bar by artist KINMX. Photograph: Alan Betson / The Irish Times

One in five young people aged 25 or younger have experienced abuse by a current or former partner, a study commissioned by Women’s Aid has found.

The research found that more than half of women (51 per cent) who experienced intimate relationship abuse were under 18 when the abuse began. Of those who experienced abuse, 90 per cent reported emotional abuse, while half experienced online abuse.

For men, one in 11 reported experiencing some form of abuse by a current or former partner. The research, conducted by RedC on behalf of the domestic abuse charity, surveyed a representative sample of 500 people aged between 18 and 25.

“It is a heavily gendered phenomenon. It is particularly women who suffer at the hands of male partners or former partners,” she said.

“As a society, we cannot continue to stand over a situation where such a significant number of young women, many minors, are deeply harmed and traumatised at the hands of current or former intimate partners.”

Minister for Justice Helen McEntee described the prevalence of relationship abuse in young people as “frightening”.

“We often think of domestic abuse as something that happens in relationships when people are married; when they’re maybe getting older. That’s simply not the case,” she said at the launch of the report. “It’s frightening to see the prevalence of this violence in this age group.”

The Minister said she is “steadfast in her determination” to confront the issue of domestic violence across all age groups, adding domestic violence is a “particular issue in Ireland”. She said it was “not just a justice issue” and required an all of Government approach.

“In its extreme form, domestic abuse can and does result in female homicide; since 1996, approximately 250 women have died violently in Ireland, with two-thirds killed in their own homes,” he said.

“One of the darkest consequences, at the level of the person, of Covid-19 has been its impact on levels of domestic violence. Calls to gardaí regarding domestic violence increased by one-fifth this year.”

Mr Higgins added that it was important to continue to raise awareness about domestic violence both in Ireland and abroad.

Separately, Migrant Women na hÉireann, a representative group for migrant women in Ireland, raised concerns about the intersection of immigration and domestic violence.

“Migrant women face additional challenges in accessing support that range from language and cultural barriers, lack of information, to social isolation and issues with their right to live in Ireland should they leave an abusive partner.”