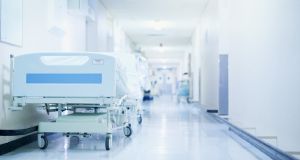 Hospitals face thye prospect of a number of 24-hour stoppages across the country. Photograph: Getty

The health service is facing strike action by nurses over pay in the New Year.

Psychiatric nurses voted by 95 per cent in favour of industrial action up to and including strikes in a ballot result which was announced on Monday.

Members of the larger Irish Nurses and Midwives Organisation (INMO) will announce on Tuesday whether its members have also backed strike action over pay.

The Psychiatric Nurses Association said members voted for industrial action “in protest at the continued failure of the Government to bring forward realistic proposals to address the recruitment and retention crisis in nursing”.

The union will meet on January 10th to consider a plan for industrial action on foot of the ballot result.

The association’s general secretary Peter Hughes urged the Department of Health and the HSE to engage with the union “to resolve the recruitment and retention crisis and avert the need for industrial action”.

The INMO has signalled that it would stage potentially a number of 24-hour stoppages in hospitals across the country if its members voted for strike action.

Nurses are currently campaigning for an across-the-board pay increase to address recruitment and retention difficulties in the health service.

Unions are seeking pay parity with groups such as physiotherapists and speech and language therapists. They argue that their members are paid about €7,000 a year less than staff in therapy grades but work more hours.

In September, the Public Service Pay Commission found in a report that there was no generalised recruitment and retention problem in nursing and midwifery although it highlighted localised difficulties.

The Government – based on the commission’s recommendations – put forward a €20 million package aimed at dealing with the issues including increased allowances and faster access to promotion. The Government said that between 18,000 and 20,000 nurses could benefit from the proposals.

A spokeswoman for the Minister for Health Simon Harris said he believed industrial action should be avoided.

She said the Minister was “calling on all parties to work intensively together to avert industrial action”.

She said the Department of Health was scheduled to meet with the oversight committee for the public service agreement this week for further engagement. She said the Minister believed this was the most appropriate forum.

Meanwhile, the INMO also said on Monday that nearly 3 dozen nurses at the Mater Hospital in Dublin have been warned they may no longer be able to work in Ireland due to delays in securing crucial documents from a Government department.

It said the nurses concerned worked in key parts of the hospital including theatres, high-dependency units, transplant surgical services and cardiology. Many have been working in Ireland for several years, it said, but needed to obtain letters of support from the Department of Business and Enterprise that their skills were needed.

The INMO said due to delays in the Department of Business the nurses had not yet received their letters of support.

The INMO said that without such letters the 35 nurses “will not be able to work in Irish hospitals during the coming winter, when hospitals are expected to come under intense pressure”.

The Department of Business said its employment permit section had experienced high levels of demand so far this year which contributed to increased processing times for applications. At end November 2018, 15,550 applications had been received, a 27 per cent increase on the same time last year.

The Department said it “fully acknowledges that the current processing times of 12 weeks for a support letter for a Stamp 4 immigration is not acceptable”.

“We are taking immediate steps to rectify this situation and we expect to see an improvement over the coming days in these Stamp 4 letters of support, with a view to having the situation resolved by the end of January, 2019.”

“Employment permits section is currently expediting all applications for a letter of support for a Stamp 4 received from nurses within the Mater Hospital. For those applicants who have not already received a decision, a response should issue by close of business on Tuesday 18th December.”

It added that “at no stage did the Department inform any nurse that they must stop working whilst their request is being processed”.