What is in Paris Agreement rulebook forged at Katowice? 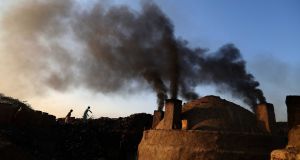 A delicate balance was struck at the summit between concerns of the smallest, poorest and most vulnerable countries and the developed nations most responsible for global warming. Photograph: EPA/Shahzaib Akber

The Katowice summit has yielded a common rulebook that will apply across the world on implementing the historic Paris Agreement on climate change, including greater transparency on efforts to reduce carbon emissions contributing to global warming.

Parties agreed to revise and enhance their commitments in the form of Nationally Determined Contributions (NDCs) before 2020, according to the 156-page rulebook. They must outline mitigation and adaptation measures as well as details of financial support for climate action in developing countries.

Parties agree how to undertake a “global stocktake” of the effectiveness of climate action in 2023, and how to assess progress. Discussions on robust measures to ensure that countries are held to proper standards and find it harder to wriggle out of commitments dominated the final stages.

As current pledges are not enough to limit warming to a 1.5 degrees and to achieve the pact’s goals, countries must commit to greater levels of climate action and support and follow through on those commitments.

The main issues to be resolved concern the use of cooperative approaches contained in the agreement’s Article 6. In short, it hinges around carbon trading. Countries were expected to agree rules to ensure they do not double count emissions reductions; when one country is allowed to pay another to lower emissions but count those lower emissions towards their own emissions. Resistance, by Brazil in particular, meant sign-off proved impossible.

The UN Intergovernmental Panel on Climate Change “1.5 degree” report was the scientific backdrop to much of the negotiations but its stark findings led to a political standoff. Alarmed by efforts to include it in the final text, some oil-exporting countries blocked an endorsement. That prompted uproar from vulnerable countries and environmental groups.

The final text omits a previous reference to specific reductions in emissions by 2030, and merely welcomes the “timely completion” of the IPCC report; not its conclusions.

A delicate balance was struck between concerns of the smallest, poorest and most vulnerable countries; the developed nations most responsible for global warming and the emerging economies wary of being saddled with a bigger burden to act.

A process for establishing new targets on finance from 2025 onwards to follow-on from the current target of mobilising $100 billion per year from 2020 to support developing countries was agreed. The text urges developed country parties to channel more grant-based resources for adaptation to climate change as against loans.

There is some acknowledgment of the long-standing “loss and damage” issue; notably how to provide financial support to countries whose economies are too vulnerable to cope with the impact of climate change. Critical to this is how to finance and compensate losses and damages that have already occurred and are irreversible.