Fitzmaurice says he did not incite Roscommon violence 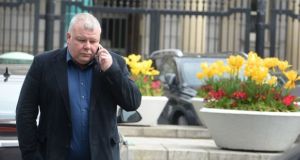 Michael Fitzmaurice: “I predicted this a year ago. The situation is getting worse.” File photograph: Cyril Byrne/The Irish Times

Independent Roscommon TD Michael Fitzmaurice has denied that comments he made in the Dáil last week had incited violence.

On Wednesday during a Dáil debate on the Anti-Evictions Bill he had warned that “Irish people need to wake up, especially if people are coming from the North. We must take them on and stop what is happening.”

He said many people were receiving notice-to-quit letters from banks selling buy-to-let properties. “In my opinion many of the banks involved are scum.”

On RTÉ’s Morning Ireland Mr Fitzmaurice rejected the suggestion that he was inciting violence in his comments about evictions.

“Violence solves nothing. We have to sit down and work with people, including the banks.”

He was responding after eight security staff who had been occupying a repossessed house, were injured in an overnight attack in Roscommon.

The eviction of two brothers and a sister from their home near Strokestown last Tuesday has sparked an angry response with many people objecting to the involvement of a private security firm, apparently from Northern Ireland.

In the early hours of Sunday morning, dozens of men arrived at the farmhouse and in the ensuing melee the eight security men were injured, and four vehicles were set alight. Three of the security staff were hospitalised. A vet was later called to the scene to put down a dog which was injured.

“I predicted this a year ago. The situation is getting worse,” added Mr Fitzmaurice. “This won’t solve anything.”

He said it wasn’t right for “two out of three people in that house who had no involvement with the banks in their life, who lived all their lives in that house, to be left homeless.”

There’s a solution to “all these things,” he said. “It’s not great if people are brought from Northern Ireland to peg people out of their home. People in their 60s.”

Mr Fitzmaurice said he did not want to see any more people getting into difficulty.

“A lot of people are losing their home or a piece of land. We are dealing with too many cases, we’re trying to deal with the banks and the vulture funds. We never hear from the people who give up.”

He said he is dealing with up to 40 to 50 people are walking away from their homes because they are afraid of going through the court system.