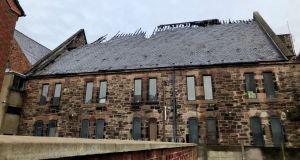 Police are treating as arson and also a hate crime a fire which caused significant damage to a multicultural centre close to central Belfast.

The fire broke out at the Belfast Multi-Cultural Association (BMCA) building in the Donegall Pass area on Thursday night.

More than 50 firefighters were tasked to tackle the blaze which, it is suspected, began in the roof of the building.

In a social media post issued not long after the fire was discovered, the association said it had “some awful news” that “after being at the receiving end of a lot of hostility and Islamophobia for quite some time tonight BMCA is ablaze”.

The association thanked fire crews and added: “We are heartbroken and shocked by these events but it will not deter us from any of our work: our volunteers despite being shaken are determined not to let down the communities we support.”

“It is believed this fire, which resulted in significant damage to the property, was started deliberately,” he said.

“We are also treating this incident as a hate crime and appeal to anyone with information to contact us,” added Mr Kirkpatrick.

“First and foremost our thoughts are with all those across the community who use the centre. The Belfast Multi-Cultural Association is a vital hub for minority communities in the city, and this mindless destruction will have a huge impact on many people’s lives,” they said in a statement.

“This was a despicable attack. It not only caused significant damage to what is a well-used community facility, but it also endangered the lives of the firefighters who had to make sure no one was inside the building and battle to extinguish the blaze.

“We and our Executive colleagues are committed to doing everything we can to eradicate racism and hate crime. It is vital that everyone in our society makes a stand against such hatred and intolerance, and we would appeal to anyone with information about who may have been responsible for this abhorrent attack to contact the PSNI,” they added.