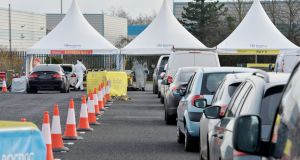 Cars line up at the RocDoc rapid Covid test centre based at Dublin Airport on Friday. Photograph: Alan Betson / The Irish Times

A further 50 deaths of Covid-19 patients were reported on Friday as the chief medical officer warned of a newly identified variant identified in Brazil.

Dr Tony Holohan urged anyone arriving into the State from Brazil to self-isolate and identify for testing as soon as possible. However he said there is no evidence the variants, identified in Brazil and in travellers to Japan from Brazil, have reached Ireland yet.

Dr Holohan said further risk assessments of the new variants are expected next week from the European Centre for Disease Prevention and Control.

The National Public Health Emergency Team (NPHET) reported 3,498 confirmed cases of the disease, bringing to 166,548 the total number of cases in the Republic.

The total number of Covid-related deaths is at 2,536. The median age of those who died was 82 and youngest was 45.

There were on Friday evening 1,850 Covid-19 patients in hospital of which 184 are in ICU. There have been 118 new hospitalisations in the past 24 hours.

Earlier, Dr Holohan and the chief medical officer of Northern Ireland issued a joint statement saying they were “gravely concerned about the unsustainably high level” of Covid-19 infection on the island of Ireland.

They urged the public to stay at home and to abide by public health advice to reduce the spread of the virus.

Dr Holohan, and his Northern counterpart Dr Michael McBride, said the high level of infection on both sides of the Border was having “a significant impact on the health of our population and the safe functioning of our healthcare systems”.

Urging people to severely restrict their movements, they said: “We are likely to see ongoing increases in hospitalisations, ICU admissions and mortality in the weeks ahead.”

On Friday afternoon, Taoiseach Micheál Martin said: “We are at a moment balanced between deep danger and great hope.

“Just as they have done in the past for deadly diseases like polio and smallpox, it is through vaccination that we will be able to put this terrible virus behind us.

“Our hospitals are experiencing their most terrible week of the pandemic so far. The scale and pace of the increase in cases which we experienced has been well beyond anything predicted.”

Speaking at an online event hosted by the Institute of International and European Affairs in Dublin, Mr Martin said Ireland was now in “an bhearna bhaol” - the gap of danger - but the vaccinations did provide hope.

Of the new Brazilian variant, Dr Holohan said anyone travelling from Brazil in the last 14 days should self-isolate for 14 days from the date of arrival, and identify themselves, through a GP, for testing as soon as possible.

“New variants of Covid-19 have recently been identified in Brazil, and in travellers to Japan from Brazil. There is no evidence of these variants in Ireland,” he said.

However, “it is essential that anyone arriving from Brazil self-isolate for 14 days from the date of arrival before entering/re-entering the workplace. We are particularly appealing to employers to enable their employees to protect each other by staying at home for the full 14 days.”

Commenting on the latest figures, Dr Ronan Glynn, deputy chief medical officer at the Department of Health said: “We have worked exceptionally hard in recent weeks to reduce our close contacts.

“At the end of December, the number of close contacts per confirmed case peaked at approximately 6. That has now dropped to 2.3 contacts. This enormous effort is the reason we are seeing case numbers beginning to fall.

“We know that it is extremely difficult to keep our close contacts to a minimum, particularly over an extended period of time. But this is the main way we can protect ourselves and our loved ones from Covid-19. Again today, we are reporting the highest number of people with Covid-19 to date in our hospitals. We must stay home to protect ourselves and each other.”

In the joint CMO statement issued earlier, Dr Holohan and his Northern counterpart Dr Michael McBride, said the high level of infection on both sides of the Border was having “a significant impact on the health of our population and the safe functioning of our healthcare systems”.

The CMOs appealed to everyone to stay at home except for essential reasons, and to avoid all unnecessary journeys, including cross-border travel.

“Many of the patients admitted to hospital in January have been under the age of 65 years. Covid-19 can affect us all, regardless of age or underlying condition,” they said.

Cross-border management of the Covid-19 has been an issue raised by many politicians and health experts, including Prof Gabriel Scally, since the onset of the pandemic.

The Border counties in the Republic consistently had higher 14-day incidence rates of the virus for much of the pandemic, which was widely blamed on different public health rules within the two jurisdictions.

Public health officials said the pressure on hospitals was expected to peak next week, though officials predicted a “huge number” of patients would still require treatment, even after admissions began to decline.

Prof Conor Deasy from Cork University Hospital (CUH) said his hospital has 150 Covid patients, with 18 in ICU on Friday morning. The hospital has seen a “step up this week in the criticality” of patients in terms of their lung function, Prof Deasy told RTÉ’s Morning Ireland.

Dr Mike Ryan, head of emergencies at the World Health Organisation, has warned that the Republic, along with other countries, could be “in serious trouble” if new variants of Covid-19 “change the rules of the game” in terms of preventing transmission.

Dr Ryan expressed concern over people not “sustaining the things we need to do at any level” as the pandemic progresses, when new variants could change the rules of infection prevention.