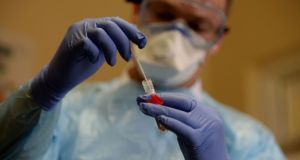 Of the cases reported on Monday, 235 are in Dublin and 232 in Cork. There were also 60 cases in Galway, 47 in Limerick, 47 in Kerry, with the remaining 410 cases spread across 21 counties. File photograph: Alan Betson/The Irish Times

The number of confirmed cases of Covid-19 has passed the 50,000 mark as the incidence of the disease continues to rise.

A further 1,031 confirmed cases of Covid-19 reported by the National Public Health Emergency Team on Monday evening brought the total number of cases to 50,993, less than eight months after the first case of the virus was recordeded in Ireland.

No new deaths were reported on Monday, leaving the total number of deaths at 1,852.

Seventy per cent of the cases are under 45 years of age, and the median age of cases is 30.

As of 2pm today, 298 Covid-19 patients were in hospital, including 34 in ICU. There were 20 hospitalisations in the past 24 hours.

Chief medical officer Dr Tony Holohan warned people with symptoms of Covid-19, those waiting for a test result or those who are a confirmed case that they must self-isolate for 10 days from when they first developed symptoms. “Self-isolation means staying in your room, away from other members of your household,” he said.

“If you live in a house with a confirmed case do not go to work or school. You must stay at home and restrict your movements for 14 days.”

A young child is among the 24 Covid-19 patients admitted to ICU over the past fortnight, according to data from the Health Protection Surveillance Centre.

Thirteen of those transferred to intensive care over the period were aged over 65 years, but one child aged 5-14 years was also admitted, along with one patient aged 15-24 years.

Thirteen children aged 14 years and under were hospitalised over the period, out of a total of 301 patients.

The 34 Covid-19 patients in ICU yesterday represented a rise of three on the previous day.

The number of patients hospitalised rose to 298, up from 274 the previous day.

Cavan General Hospital had the highest number of virus patients on Sunday evening, at 33, followed by Tallaght University Hospital, with 24.

Meanwhile, the HSE has introduced a new swab testing kit for Covid-19 it says will improve safety and may improve turnaround times.

The new lysis buffer inactivate virus samples at the point of sampling rather than later in the process, in the laboratory.

The HSE says this means the swab is safer to use and to transport, while its use also streamlines the first step of the laboratory testing process.

So far, over 1 million swabs for the virus have been taken in the community and 1.3 million tests have been completed.