Quarter of all cases in region have occured in the past week, department figures show 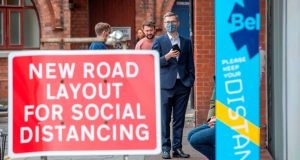 A quarter of all Covid-19 cases in Northern Ireland have occurred in the past week, the latest figures from the North’s Department of Health disclose.

On Monday afternoon the department in its daily bulletin reported 820 new cases of coronavirus taking the total number of cases since the outbreak of the pandemic in March to 28,040.

There were six more deaths, bringing the total to 621.

So far Northern Ireland has recorded 28,040 cases of the virus, with just over a quarter of them – 7,056 – happening in the past seven days.

There are now 261 Covid patients in Northern Ireland hospitals, with 29 in intensive care units and 25 on ventilators.

The highest incidence of the virus is still in the Derry and Strabane area which in the past seven days experienced 770 cases per 100,000 of the population.

Meanwhile, in the Assembly DUP North Antrim MLA Paul Frew was critical of the new lockdown measures agreed by the Executive last week, including by DUP ministers. He said there was “no rhyme and no reason” as to why businesses such as hairdressers that had put in place infection control measures had to close.

“I have yet to see any evidence to suggest that those businesses were the places where the disease was contracted. It is an absolute shame and disgrace that the Executive can make a decision like that,” he said.

Mr Frew added, “The health minister [Robin Swann] talks in Biblical terms at the start of this crisis. Let me talk in Biblical terms, Mr Speaker, it is a God-given right for a person to endeavour to earn a living to provide for his or her family.

“And the Executive have removed that right from these people without having any idea of the support mechanisms going to be in place.”

The North’s health minister Mr Swann acknowledged that the restrictions were “extremely challenging” but said they were “proportionate and well founded”.

He urged people to “dig in and get through winter together”.

The criticism of the Executive’s restrictions by DUP agriculture minister Edwin Poots also was raised in the chamber, particularly his comment that the difference in transmission of the virus between nationalist and unionist areas was “around six to one”.

Sinn Féin MLA Pat Sheehan said Mr Poots had “accused the nationalist-Catholic community of having spread this virus” and that the DUP minister “also called into question the collective decision-making of this Executive”.

He said such comments were “unbecoming of any minister” and he asked the Sinn Féin speaker Alex Maskey to investigate.

Mr Maskey said the comments which were made to the BBC and UTV on Friday were not the “bailiwick” of the speaker and therefore he would not be investigating.

He raised the question however about whether the remarks were “touching” on the ministerial code of conduct for ministers.

Mr Maskey said that last week the Northern Executive and officials such as the chief medical officer and chief scientific adviser all did “Trojan work” to get agreement on how to tackle the spread of Covid-19.

It was “regrettable”, he said, that that collective effort and the calls for “people to stand shoulder to shoulder on this issue were perhaps undermined by some people’s remarks”.

During that exchange in the chamber the Traditional Unionist Voice leader Jim Allister raised the issue of the confusion caused over conflicting advice on whether some fans could attend Irish League matches.

On Friday the Sinn Féin communities minister Caral Ní Chuilin wrote to sporting organisations saying spectators were not allowed at such games.

Mr Allister said Mr Ni Chuilin had misrepresented the regulations “causing untold confusion and upset” and that she should have known the rules.

Mr Maskey said it was not for him to adjudicate on the matter. He repeated however that the good work of the Executive should not be “undermined by the actions or the words of any member”.

Meanwhile, the communities minister Ms Ní Chuilín has announced that £3 million is to be immediately allocated to artists in Northern Ireland.

Administered through the North’s Arts Council Ms Ní Chuilin said the £3 million pot will allow more than one thousand artists to be supported through individual grants of up to £5,000.

Ms Ní Chuilin added that overall £29 million is to be allocated for the arts, culture, heritage and language sectors.