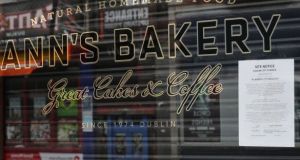 Plans to convert the last remaining cafe on Dublin’s Moore Street into a betting office have been refused by Dublin City Council.

Bookmakers Ladbrokes wanted to turn Ann’s Bakery and Restaurant into a new branch. However, the council said this risked a proliferation of betting shops in the area and “lower order” retail on Moore Street.

Tom Holbrook, chairman of the Moore Street Traders Committee, said market stall holders were “strongly opposed to having a business of this nature in Moore Street”.

“Moore Street is famous worldwide for its food and character. We feel this proposed business would take away from that.”

Stephen Troy, a Moore Street butcher and a member of the Dublin 1 Business Alliance, said another bookmakers would have had a detrimental effect on plans to develop a 1916 commemorative centre on the street.

“There are plans to implement a national monument within the Moore Street terrace to commemorate the heroes and events of 1916 which will become a huge tourist attraction, and it would look absolutely hideous to have another gambling outlet adjacent to such a building.”

Independent city councillor Nial Ring said proposing another bookmakers for the street had been a “bad bet”, and “flies in the face of the genuine ambition of traders, businesses, historians and local representatives alike to protect and enhance the street”.

Local Sinn Féin TD Mary Lou McDonald said the bookmakers would have been inconsistent with the vision for the street to develop a “better experience for visitors to the street, including heritage, small retail, a variety of street stalls and food”.

Green Party councillor Donna Cooney, who chairs the Lord Mayor of Dublin’s forum on Moore Street, said a betting office opposite the 1916 national monument would not be suitable.

In a planning application to the council consultants acting on behalf of Ladbrokes said another bookmakers on Moore Street would not constitute an intensification or proliferation of betting shops in the area.

“Betting offices represent an appropriate city centre service which serves to attract people into the area and add to the mix of uses which we submit will aid the vitality and vibrancy of the area.”

However, the council said the proposal would set an “undesirable precedent for similar such use and together with the existing lower order retail uses on this street would result in a proliferation of such uses in the retail core”.