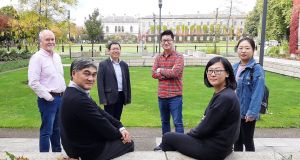 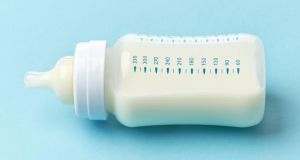 The findings indicate a need for new guidelines to minimise exposure risk for infants. Photograph: iStock

High levels of microplastics are released from infant-feeding bottles during formula preparation and when they are being sterilised, researchers at Trinity College Dublin have found in a study of global significance.

The higher the temperature of liquid inside the bottle, the more microplastics are released, they conclude in a study published on Monday. The findings, they suggest, indicate a need for new guidelines to minimise exposure risk for infants.

The study provides more evidence of how tiny plastic particles may get into the human food chain. Microplastics harm oceans and aquatic life but the impact from accumulation in humans is unclear.

“When we saw these results in the lab we recognised immediately the potential impact they might have,” said lead researcher Prof John Boland.

“The last thing we want is to unduly alarm parents, particularly when we don’t have sufficient information on the potential consequences of microplastics on infant health.”

With colleagues Dr Jing Jing Wan and Prof Liwen Xiao, they called on policymakers to reassess current guidelines for formula preparation when using plastic infant feeding bottles. “Crucially, we have found that it is possible to mitigate the risk of ingesting microplastics by changing practices around sterilisation and formula preparation,” Prof Boland added.

The team analysed the potential for their release of from polypropylene infant-feeding bottles – the most commonly used bottle – during formula preparation by following international guidelines, and found warmer liquids (formula or water used to sterilise bottles) result in far greater release of microplastics.

In findings published in Nature Food, they also estimate the exposure of 12-month-old infants in 48 countries and regions.

– Polypropylene bottles release up to 16 million microplastics and trillions of even smaller nanoplastics per litre. Sterilisation and exposure to high temperature water significantly increase microplastic release from 0.6 million to 55 million particles/l when temperature increases from 25 to 95 degrees

There is growing evidence to suggest these tiny plastics are released into food and water sources through the chemical and physical degradation of larger plastic items. Some studies have shown potential transfer from oceans to humans via the food chain but little is known about direct release of microplastics from plastic products through everyday use.

Polypropylene is one of the most commonly produced plastics in the world for food preparation and storage but “despite its widespread use the capacity of polypropylene to release microplastics was not appreciated until now,” the researchers note.

Given widespread use of polypropylene bottles and quantities of microplastics released through normal daily use, the team realised the potential exposure of infants to microplastics “is a worldwide issue”. It factored in market share of the feed bottle; infant daily milk-intake volume, and breastfeeding rates.

The team from Amber Research Centre for Advanced Materials and Bioengineering Research; TrinityHaus and the Schools of Engineering and Chemistry found the overall average daily consumption by infants per capita was 1,580,000 particles from these sources.

Given the global preference for polypropylene bottles and food containers, it is important to mitigate against unintended generation of micro and nanoplastics in infant formula and “there is an urgent need for technological solutions”, they add.

Prof Liwen Xiao said previous research focused mainly on human exposure to micro and nanoplastics via transfer from ocean and soils into the food chain driven by the degradation of plastics in the environment.

“Our study indicates that daily use of plastic products is an important source of microplastic release, meaning the routes of exposure are much closer to us than previously thought.”

Researchers Dr Dunzhu Li and Dr Yunhong Shi said: “We have to accept that plastics are pervasive in modern life, and that they release micro and nano plastics through everyday use. We don’t yet know the risks to human health of these tiny plastic particles, but we can develop behavioural and technological solutions and strategies to mitigate against their exposure.”

Dr Jing Jing Wang said they will be investigating specific mechanisms of micro and nano plastic release during food preparation in a host of different contexts.

The research was supported by Enterprise Ireland; Science Foundation Ireland, a School of Engineering Scholarship at Trinity and the China Scholarship Council.

In light of high levels of microplastics associated with the use of polypropylene infant-feed bottles, researchers at TCD recommend:

– Do not use sonication to clean plastic infant feeding bottles