From the archives: ‘I can’t rest until I bring poor JoJo Dullard home’ 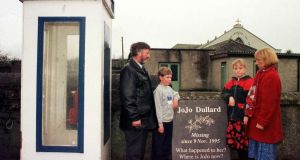 Jo Jo Dullard’s sister Mary Phelan, right, in Novermber 1998 with her husband Martin and their children with the memorial stone besides the phone box that JoJo made her last call from, in Moone Co Kildare. Photograph: John Cogill

The following article was published on November 18th 1998 and centres around the campaign of JoJo Dullard’s sister Mary Phelan. Twenty years later in 2018, Ms Phelan died having spent 22 years looking for her sister. Today, gardaí announced that JoJo’s disappearance is being reclassified as a murder investigation, concluding that she is dead and “met her death through violent means” .

A fax machine rests incongruously beside the kitchen sink. An answer-phone system records carefully worded messages. There are piles of meticulously folded newspaper clippings and boxes of specially printed envelopes. And there are files filled with three years of correspondence from senior government officials, politicians and presidents.

These are some of the outward signs of how dramatically the life of Mary Phelan has changed since her 19-year-old sister, JoJo Dullard, went missing three years ago this month while hitchhiking in Moone, Co Kildare.

Mary’s husband, Martin, a cattle farmer, has also become immersed in the daily struggle of finding out what happened to his sister-in-law. And not just to her, but to that most ephemeral of communities, the State’s missing people.

This Sunday a memorial to JoJo will be placed beside the phone-box where the Kilkenny waitress made a phone call to her friend 47 miles from her home on the night of November 9th, 1995. She was never heard from again. The money for the monument was raised by a women’s group in Castlecove, Co Kerry. The Castlecove Women’s Group was involved in setting up the JoJo Dullard Memorial Fund that was launched by the Fianna Fail TD for Carlow-Kilkenny, John McGuinness, last June.

The number of people permanently missing here has grown to 84, says Mary Phelan as we talk in her home four miles outside Kilkenny city. The couple’s two children play outside. Their Auntie Jo-Jo lived here once. She was raised by her older sisters after her mother and father died of cancer.

Mary and Martin both believe JoJo was murdered that November night while hitching back to her home, a flat in Callan, Co Kilkenny. They, like many other Irish families with missing loved ones, have accepted the worst. Now all these people have are questions. What happened? Who knows? Who is responsible? Will they ever be able to bring their mother, sister, daughter, son, husband or wife home?

Kept going by what she calls a magic bond to her sister, Mary Phelan has spent the last three years pricking society’s collective conscience through every medium possible.

She remembers the moment her torment turned into a powerful tool. It was not long after JoJo had disappeared. She was standing at a window and felt her sister’s presence. “A little idea struck me. I was thinking, you are out there somewhere, JoJo, and if I can’t find you I won’t let you be forgotten. That was the start and it is only with the help and support of a lot of people, friends, family, members of the public, the media, that the idea has grown,” she says.

It started with Mary and Martin going to meet the families of other missing people. Their names are recognisable from the sporadic newspaper reports of their disappearances, the search afterwards, new pieces of evidence, clues to their fate. Eventually they become names to list when, like now, the subject of missing people becomes newsworthy.

The families of people like Annie, Fiona, Philip, Eva and Ciara are all fighting to ensure their loved ones exist as something more memorable than another bleak statistic.

Mary Phelan says: “The families all had the same story and felt they were kept out of things and left to search on their own. That was where the rest of it started.”

The rest of it included a 70,000-signature petition brought by Mary and a group of supporters to the Dail. They were campaigning for a search to take place of all land within a 20-mile radius of Moone, a search that has still not been carried out. The second part of the petition called for the establishment of a specially trained Garda unit dedicated solely to examining the cases of all missing people.

Since then, the Garda operation, TRACE, has been set up to investigate the cases of six people, all young, attractive women between the ages of 19 and 25 who went missing over the past decade. JoJo Dullard is one.

Mary has met politicians, including the Taoiseach; Nora Owen when she was justice minister, and John O’Donoghue, the current Minister. This week she and her husband put their case to the President, Mrs McAleese. The softly spoken, solidly determined Phelans proved a powerful lobbying force as their unhappiness with the progress being made in the case of JoJo and all the others grew.

Last March a documentary was made by Graph Films in Dublin about the plight of several of the more high-profile missing-person cases in the country. After the screening Mary received a letter which was to add the vital strength of numbers to her campaign.

Clare Blake-Bohm from Co Kerry wrote to Mary Phelan as a member of Castlecove Women’s Group, to voice her solidarity and to articulate the germ of an idea that has become the JoJo Dullard Memorial Fund. “The families seemed so alone,” she says. “We couldn’t believe it when we learned that they had to finance things like the printing of posters and the cost of distributing leaflets themselves.”

Her husband, Karl-Heinz, did the stone work on the JoJo Dullard monument for free, while the women’s group raised funds for the materials. The campaign has been boosted by the recent commitment by Adshel, a company that sells advertising space on bus shelters, to donate space where families can display information about those who are missing. They hope other such sponsorship will follow.

Ms Blake-Bohm feels the official attitude towards many of the missing is that they are expendable: that because some may have been depressed when they went missing, or were hitchiking, it was somehow their fault. “Those things shouldn’t matter. Too many women are going missing and what should be looked at is who is responsible.”

John McGuinness is the main public representative involved in the fund and is outspoken about the need to focus public attention on the family and friends of all those “trapped in a dreadful circle of hope and despair.”

He is now spearheading a fund-raising campaign to erect a permanent memorial to all missing people in Kilkenny, where their relatives and friends “who have nothing, no body, no grave, can go to grieve and reflect”. He says the Government should donate money to this fund and act in relation to a special response unit for missing persons and a 24-hour help-line.

The JoJo Dullard Fund was given added kudos when the UN High Commissioner for Human Rights, Mrs Mary Robinson, agreed to become honorary patron. A Mass will be said this Sunday when the monument is unveiled. The church will be filled with white flowers arranged by several affiliated flower clubs from throughout Ireland.

JoJo Dullard’s sister says: “I just can’t rest until I bring poor JoJo home. I know JoJo. I know she would have done the same for me,” she says.