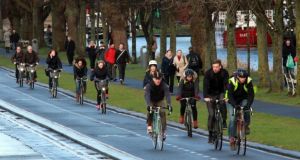 Enabling more people to cycle is the easiest way to reduce overcrowding on public transport and encourage more sustainable modes of commuting, a commuter lobby group has said.

Dublin Commuter Coalition has also called for the use of bus mounted cameras, junction cameras and a system to allow pedestrians to report infractions of the law using their smartphones.

The lobby group has released a manifesto in the lead up to the general election, calling on politicians to prioritise public transport, cycling and pedestrian infrastructure in the Greater Dublin Area.

“All modes of public transport in the Greater Dublin Area are experiencing extensive overcrowding. There is not enough capacity and adding extra capacity takes several years to achieve,” the document says.

“The cheapest, fastest and simplest way to reduce overcrowding is by enabling more people to cycle. That is why the key to our current transport woes is to invest and invest heavily in cycling provision as fast as humanly possible.”

Dublin Commuter Coalition state that the bus is the “work horse” with the majority of public transport journeys taking place via this mode.

As a result, the group says, they should be prioritised over private cars and taxis, particularly during peak hours or in problem areas like College Green or along the canals.

The coalition has also called for the system to be expanded. They say that fewer than 10 of the 82 largest towns, with over 5,000 inhabitants, in Ireland have public bus services in their areas.

“They are actively being dissuaded from utilising a more sustainable mode of travel. Without mentioning the alarming lack of cycling facilities outside of Ireland’s major cities, the car is literally their only option. We have intentionally designed our towns and cities to make this so,” the manifesto adds.

Among some of the other demands, the coalition also wants to see the provision to begin the development of high speed rail from Belfast to Cork via Dublin, extensive retrofitting of existing roads to allocate for cycling, enhanced encouragement of the use of e-rides and a fundamental expansion in the states provision for those with mobility of sight impairments.

Kevin Carter, chairperson of Dublin Commuter Coalition said the benefits of these changes will outweigh the costs.

“The first reaction to a list like this is likely to be, ‘How could we possibly afford all this?’ But the real question is how can we not afford to do this?” Mr Carter said. “Congestion is due to cost Dublin alone €2 billion a year by 2030. It’s not doing this that will cost us.”

The coalition added that it will “scrutinise” candidates and parties in the run up to the election, with “the aim of giving voters the best information on sound transport thinking”.

The 12 topics in the manifesto are:

- Roads for all modes

- People with reduced mobility or sight

Covid-19: About 1,500 fines issued for non-essential travel over past two weeks 18:12
Councillor takes High Court action over selection process for development board 17:55
Prominent Dublin councillor resigns from Green Party 17:43
Hitman to be sentenced for shooting drug cartel target next month 17:42
Shoppers spent more on Christmas 2020 than in previous year 17:36