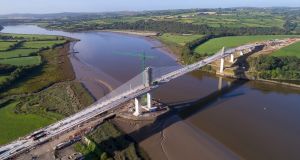 Construction of the Rose Fitzgerald Kennedy Bridge in Co Wexford was delayed due to crumbling concrete. File photograph: The Irish Times

New Ross bypass in Co Wexford will be officially opened by Taoiseach Leo Varadkar on January 29th – one day ahead of the route opening to public traffic.

The unusual timing of the official opening – most take place on the same day that the public are given access to the route – is the latest twist in the development of the bypass which incorporates Ireland’s longest bridge.

The road incorporates the Rose Fitzgerald Kennedy Bridge. At 887m long it is Ireland’s longest bridge and also the world’s longest “extrados” bridge – a combination of cable stay and pier support, according to builders Bam Ireland and Spanish firm Dragados.

Development of the €230 million bridge and bypass was beset by controversy, since it emerged that concrete used in a section of the span had crumbled and had to be replaced.

A statement by project “stakeholders” acknowledged “localised concrete non-conformance”on a section where the bridge meets one of the supports. The problem was discovered last summer by engineers monitoring the construction and widely reported in social and mainstream media.

Wexford County Council said the problem had led to a delay of “weeks, not months”.

This week the cost of the remedial work was put at “millions but not tens of millions of euro” by a source close to the project.

Builders Bam did not respond to requests for a comment on the cost.

Transport Infrastructure Ireland said the project was a public private-partnership and as such the risk of such costs had been transferred to the contractor. “The contractor has total liability and responsibility for cost,” said the spokesman.

1 McDonald rejects idea SF public meetings ‘an affront to democracy’
2 Why Sinn Féin will not call the State by its name
3 Europe grapples to rein in global spread of coronavirus
4 Maureen Dowd: For the White House parasite, all restraint has gone
5 Coronavirus: Questions over Ireland’s readiness for what might come
Real news has value SUBSCRIBE