Social Democrats zero in on housing, health and transport 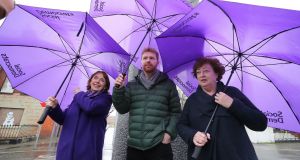 At the launch of their general election campaign the Social Democrats emphasised their commitment to delivering on core issues: housing, health and public transport.

Party co-leaders Róisín Shortall and Catherine Murphy were joined by candidate and Dublin city Cllr Gary Gannon to launch the campaign near the former Magdalene laundry on Seán McDermott Street in Dublin on Thursday.

The Social Democrats are running 20 candidates in the election and hope to win between five and eight seats.

The co-leaders said they would not rule out working with any party after the vote so long as they are able to influence the direction of government.

The party’s representatives said their campaign will focus on four pivotal issues and seek to solve them through practical solutions.

“We’ve got to stop paying lip service and we’ve got to actually deliver on things like Sláintecare, social and affordable housing ... and we need public transport that stops the traffic chaos,” said Ms Murphy.

Ms Murphy said the Social Democrats believe establishing an anti-corruption agency is important. The co-leader also noted the necessity of a pay-as-you-save scheme in relation to insulation of homes.

What about the homeless?

On the contentious issue of housing Ms Shortall said homelessness is the “sharp end” of the crisis and that using public land is the best way to resolve it.

“It’s the job of government to ensure there is an adequate supply of affordable housing for all people, including renters and people who are prepared to purchase their own home. That has been the biggest failing of this government,” she said. “We have ... public land [and] should be building affordable housing and social housing on that land.”

He added: “I’ve been canvassing around for the last six years, and particularly for the last year. And during this campaign a lot of the policies that are coming up on doors, in frustration, are about family. They’re about people being unable to access childcare, care for people when they’re older and disability care.

“The solutions are simple. The Social Democrats have them, it’s in social democracy; it’s in building for the future.”