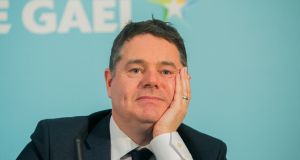 Fine Gael and Fianna Fáil are keeping their powder dry on their economic plans until next week, but even at this early stage – following press conferences designed to shift the election debate towards economic matters on Thursday – it is clear the parties’ promises for managing the economy and their budgetary priorities in the coming years have more in common than either might like to admit.

Projections for economic growth and the ensuring rise in Government revenues suggest that the next government will have some €11 billion in “unallocated resources” over the next five years – in other words, this is the cash they will have to spend on additional spending and/or tax cuts in the next five budgets, beyond what is already committed.

This is what we used to call the “fiscal space” (remember that?) – the money with which (assuming it changes nothing else) the next government gets to do new things. Unless it cuts spending or raises taxes in other areas, all those election promises will have to be funded out of this €11 billion.

Of course, we’ll have to wait until the parties reveal the detail of their plans next week before we can see how they differ. The plans of the smaller parties will also be worthy of examination.

But it seems that both of the big two parties will make promises to increase public spending, both current and capital. Both will propose a bigger and better-paid public service. Both will include some effective reductions in income tax. And both will promise a buffer to deal with potential difficulties.

There are two big threats. One is the anticipated slowdown in bumper corporation tax receipts that have turbo-charged Paschal Donohoe’s coffers in the last few years, and that produced the surplus last year of which he is so proud. That could slice billions off the money that the next government has to play with.

The other danger is that the UK could end the transition period later this year without a trade agreement in place, and default to World Trade Organisation trading terms – a version of the crashout Brexit that spooked everyone last year. This would result in a sudden – and possibly very severe – economic slowdown, with consequent pressures on the exchequer.

Fine Gael says the surpluses it will run could absorb the impact of these economic shocks. But if the worst happens, it might not end there – as Fianna Fáil could no doubt tell them.

What they will do if things turn bad will be an important part of the interrogation of the two parties when they reveal the detail of their budgetary plans. But the health of the economy – for which Fine Gael is entitled to take some credit, it should be said – means policy choices about public services, spending priorities and tax cuts are real options for the country.

Bluntly put, while the next government undoubtedly faces potential threats, it will have money to spend.

How exactly do the parties, big and small, propose to spend it? That is the phase of this election campaign into which we are now about to move.