Private specialists allowed to treat their patients in public system 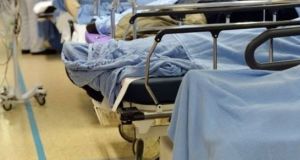 The agreement with doctors will have a similar termination clause to that in place between the State and private hospitals. File photograph: The Irish Times

The Government is to allow private-sector medical specialists treat their existing fee-paying patients in the public system on condition they do not charge them.

In revised Government proposals the Health Service Executive can also pay to use private rooms which consultants may have outside of private hospital premises if such arrangements are deemed necessary and represent value for money.

However, under the proposals such facilities would be “ limited to public activity only in line with the need to assure continuity of care”.

The Government has already taken over, in effect, the beds and facilities of 19 private hospitals across the country for three months as part of its plan to tackle the current coronavirus crisis.

It also wants to bring up to 600 medical consultants who work full time in the private sector at present into the public system. The Government has offered them a temporary locum contract under which they could see only public patients.

The consultants would be paid in line with existing arrangements in place for specialists treating only public patients in public hospitals – known technically as a type A contract – which has a salary ranging from €141,000 to €195,000.

The private consultants have expressed concern about thousands of existing private patients who are already on their books if they moved exclusively into the public system . This is known as the “ continuity of care” issue.

The Irish Hospital Consultants Association urged its private-sector members last week not to sign up to the Government’s proposed contract pending further clarifications.

In a revised document tabled on Friday the HSE maintained that continuity of care for patients being treated by private consultants was a top priority.

The HSE said it envisaged that “ all current patients who require ongoing care will remain under the care of the participating consultant as a public patient. Patients currently in treatment and in need of continued urgent care will not be charged for their care.

“For the duration of the agreement the statutory charges in respect of public patients will apply [with the exception of patients with Covid-19].

“The policy intention is that non-Covid-19 urgent care will be provided in the private hospitals insofar as practicable and possible, based upon the progression of the disease.”

The HSE said that arrangements would be introduced on a compassionate basis, to ensure that patients receiving drugs or other treatment that were not provided in the public system would continue on their treatment.

The HSE said that staff and others currently directly employed by private consultants in off-site rooms could benefit from the income supports provided by the State, as appropriate.

“Other supports established by the Government to support business owners and their staff throughout the Covid-19 pandemic may also be available.”

Under the proposals consultants treating public patients in private hospitals will be covered by the State’s clinical indemnity scheme backdated to the start of the agreement with the private hospitals.

The agreement with doctors will have a similar termination clause to that in place between the State and private hospitals.

The deal will also provide for overtime and death in service benefits.

The Irish Medical Organisation (IMO) said following talks with the HSE and the Department of Health it was reviewing the proposed revised contract for fully private consultants and the issues surrounding the continuity of care. It said it would communicate to its members later on Friday.

The IMO said: “While we welcome additional capacity being available to the public system we are strongly of the view that the unjust and inequitable pay discrimination that exists for those [public hospital] consultants appointed post-October 2012 should be addressed in the context of the urgent recruitment drive to get more consultants into the public system. It is little consolation to those consultants to receive thanks for their efforts yet still have those very efforts and their commitment to the public system under valued.”