Euro zone deal explained: Breaking down the detail of the €500bn funding

Naomi O’Leary: It’s apparent that the most contentious issue has been kicked down the road 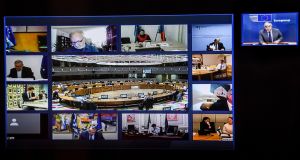 The eurobonds issue has been escalated up the chain of command to be dealt with directly by EU national leaders rather than by finance ministers.

What did the euro zone finance ministers agree last night?

Half a trillion euro is a big number, and it was important for the Eurogroup to announce something that sounded impressive after days of fraught negotiations that were repeatedly delayed.

But break down the detail and it’s apparent that the most contentious issue has been kicked down the road.

So, no eurobonds - or so-called corona bonds - then?

No. The appeal of nine countries, led by Italy and including Ireland, for the issuance of joint debt failed.

Italy argues that the idea of eurobonds or coronabonds, which would help it bring down borrowing costs and be a step to greater economic integration of the euro zone, has lived to fight another day. This hope is pinned on a paragraph in the agreement that states “we also agreed to work on a Recovery Fund”.

The issue has been escalated up the chain of command to be dealt with directly by EU national leaders rather than by finance ministers.

“Discussions on the legal and practical aspects of such a fund, including its relation to the EU budget, its sources of financing and on innovative financial instruments, consistent with EU Treaties, will prepare the ground for a decision,” the text reads.

But shared liability was explicitly ruled out by German Chancellor Angela Merkel on Thursday, not to mention by the adamant Dutch.

Counting on those views changing seems a remote hope at best, especially after the naysayers stuck their necks out this time and saw it pay off. Since even before the pandemic, the EU has been unable to agree on a budget due to divisions between the ‘frugal’ camp who champion efficiency, and those who argue that parsimony hobbles the EU’s ability to be effective and achieve its ambitions.

The French have mooted going ahead with shared debt without the naysayers, but it’s unclear how this could work.

So what was agreed?

Well, the figure of €500 billion breaks down as follows.

Part of it is an employment guarantee scheme recently invented by the Commission. If member states put up 25 per cent collateral, they can get a slice of loans raised by the Commission on the market. This would be used to subsidise companies to keep employees on the books. The scheme would be worth a maximum of €100 billion.

Then there are additional loans from the European Investment Bank to support companies: €25 billion of extra guarantees, so it can step up lending by €200 billion.

But the biggest chunk is from the EU’s bailout fund, the European Stability Mechanism, which was created to dig out states during the euro zone debt crisis. States can borrow up to 2 per cent of their GDP, with a total of €240 billion available.

Usually, taking loans from the ESM comes with the requirement to balance the books – known as “reforms” by supporters, “austerity” by critics.

This time, borrowing will come without these strict conditions as long as the money is solely for responding to the pandemic and relates directly or indirectly to health spending. This definition was loose enough for Italy to claim victory, but in reality, it’s pretty much exactly the compromise the Netherlands had proposed.

But it will be domestically difficult for states like Italy to actually tap the fund without risking a eurosceptic blowback because of its deeply toxic implications from the bailout years.

Its initials in Italian, ‘Mes’, feature as a regular press bogeyman. Even the news that ‘an agreement had been reached on Mes’ provoked deeply negative reactions in Italy, where it was misconstrued by many to mean the country was already being forced to impose austerity again.

What does it all mean for the broader picture?

The European Commission emphasises that the deal should be seen in the context of various other measures, particularly the decision by the European Central Bank to throw off prior restraints to print money, by buying government bonds to keep EU countries liquid.

It notes that pending by national governments to address the crisis already amounts to 3 per cent of EU gross domestic product, while tax deferrals and loan guarantee schemes for companies on the brink are estimated to be worth even more.

Finance ministers and the Commission had already agreed to relax the usual budget rules to give states free rein to spend and support companies, and freed up existing unused funds from the EU budget to be used to respond to the crisis.

But what’s missing is a dramatic step, a structural change, that Italy and Spain argued was necessary to demonstrate to their citizens that the EU is worth it and comes through for the hardest-hit in times of crisis.