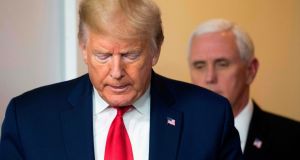 US Vice President Mike Pence follows US President Donald Trump as they arrive for the daily briefing on the novel coronavirus. Photograph: Jim Watson/AFP via Getty Images

US. inflation slowed sharply in March as the coronavirus helped push down fuel and other costs, while an underlying gauge of consumer prices posted the first monthly drop in a decade.

The consumer price index fell 0.4 per cent from the prior month and rose 1.5 per cent annually – down from a 2.3 per cent year-over-year gain in February – as energy prices dropped by the most in five years, reflecting one of the sharpest-ever collapses in oil prices, Labor Department data showed Friday.

The core index, which excludes volatile food and energy costs, was down 0.1 per cent from the prior month – the first decline since early 2010 – and up 2.1 per cent from a year earlier.

Airfares posted a record monthly decline of 12.6 per cent, apparel was down a record 2 per cent and new car prices dropped 0.4 per cent as the pandemic began altering spending patterns, incomes and product supplies. Food costs rose 0.3 per cent.

Energy prices fell 5.8 per cent from the prior month as fuel costs plunged 10.5 per cent, the biggest drop in four years. That also reflected a price war between Russia and Saudi Arabia.

The US’s top infectious disease expert warned on Friday that even though hard-hit spots like New York are showing positive results in the battle against coronavirus, it is too early to relax restrictions on Americans. The warning from Dr. Anthony Fauci came as the Trump administration’s top economic officials said on Thursday they believe the US economy could start to reopen for normal business in May, despite health experts’ urging for continued social distancing measures to defeat the coronavirus. – Bloomberg, Reuters