‘This is just to prove I can write,’ royal joked as he signed visitors’ book in Government Buildings 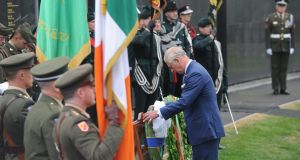 Prince Charles lays a wreath to the dead of the 1916 Easter Rising during a visit to Glasnevin Cemetery in Dublin Ireland on Friday. Photograph: Aidan Crawley/EPA

Prince Charles has laid wreaths in honour of the Irish and British people who died in the first and second World Wars and in the Easter Rising at Glasnevin Cemetery in Dublin.

On the final day of his four-day visit to the Republic and Northern Ireland, the Prince, accompanied by his wife Camilla, the Duchess of Cornwall, unveiled memorial stones to four Irish-born recipients of the Victoria Cross, the highest honour for gallantry in the British armed forces.

Prince Charles and Minister for Arts Heather Humphreys also laid wreaths to honour the war dead of the first and second World Wars at the Cross of Sacrifice, the monument unveiled by President Michael D Higgins and the prince’s cousin, Prince Edward, the Duke of Kent, in 2014.

They later laid two more wreaths at the Necrology Wall that lists the names of 488 people killed during the 1916 Rising, including 268 civilians, 119 British Army soldiers, 63 rebels and 40 children.

“Each name has a story. Some are well known and some will never be known. It is up to each visitor to take from the wall what they wish,” said John Green, chairman of Glasnevin Trust, in the second of two sets of remarks, the only public comments made during the two-hour visit.

He was the only one of the four killed in the war. All won the crosses for acts of gallantry fighting 100 years ago and served in the Canadian Expeditionary Force.

Among the other soldiers commemorated was Lieutenant Frederick Harvey, who played rugby for Ireland as a schoolboy before the war in the Home Nations championships of 1907.

“The arts, sport and culture have long shown the way on this island, point about how much we have in common and how little separates us,” Mr Green said in his remarks.

He recalled the words of Irish nationalist politician Willie Redmond, killed in the first World War who spoke of his Irish Volunteers “pulling famously” with Ulstermen during the conflict.

“Days like today will enable us to rekindle that spirit,” he said.

By November 11th, 2018 — the centenary of the Armistice marking the end of the first world wars — the four memorial stones will be among 35 Victoria Cross paving stones at Glasnevin.

The Duchess of Cornwall, wearing a navy below-the-knee-length coat and navy dress with white polka-dots, unveiled the Victoria Cross stone to Sergeant Major Robert Hanna from Kilkeel, Co Down, who was personally awarded his cross by King George V, Prince Charles’s great-grandfather.

Prince Charles spoke to relatives of the Victoria Cross winners before proceeding on a tour of the cemetery and his visit to the Necrology Wall.

“He asked me what regiment Fred was in,” said Patrick Harvey, the soldier’s great grand-nephew, the Church of Ireland rector in Abbeyleix, Co Laois, told The Irish Times afterwards. He pointed out that his grandfather’s brother served in Lord Strathcona’s Horse, or the Royal Canadians.

“He said, ‘oh yes, I think I am in charge of them,’” said the cleric, referring Prince Charles’s role as colonel-in-chief of the regiment.

Rev Harvey said that the prince’s first visit to Glasnevin was “very significant” — “his preparedness to come is important” — but said that his grand-uncle would not have been impressed by the occasion.

“Uncle Freddy wouldn’t have liked any of this, the show,” he said.

On a tour of the cemetery, Prince Charles and the Duchess were shown the graves of Eamon DeValera, the parents of James Joyce and the resting place of Michael Collins.

“He had a good knowledge of Irish history and a very keen interest not only in the cemetery but in the country as well,” said Conor Dodd, the cemetery’s historian who led the Royal couple on the tour.

George McCullough, the chief executive of the Glasnevin Trust, said the royal visit was a chance to show the non-denominational nature of the cemetery as envisaged by Daniel O’Connell.

“Part of the ethos that we have tried to develop here that this is a place for Irish people to commemorate regardless of where you are from, whether it is the Shankill Road or Sandy Row, or if you are from Cork or Kerry,” he said.

“For many years, it was viewed as a Republican Valhalla, but it is a cemetery for all.”

The visit was a solemn affair with the Prince standing upright and looking pensive at the Cross of Sacrifice and, later, the Necrology Wall as the Piper’s Lament and the Last Post were played twice.

“It is more natural and it doesn’t provoke defensive reactions that it once did, which is very welcome, notwithstanding Brexit,” said one of the attendees, Martin Mansergh, the one-time Government adviser who played a key role in the Northern Ireland peace process.

“The two countries will be very closely linked in sort of personal, social, cultural, sporting, dimensions. It may be just a question of finding a new modus vivendi. No one wants to lose the good relationship that has been built up over the last 10, 20 years.”

Prince Charles travelled from Glasnevin to Government Buildings where he was met by Taoiseach Enda Kenny. He proceeded to Mr Kenny’s office for a meeting where he signed the visitors’ book.

“This is just to prove I can write,” he joked as he signed “Charles.”