ASTI members to lose thousands of euro even if action suspended

Department tells union ‘boat has sailed’ over retrospective pay worth some €3,000 per teacher 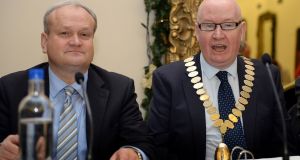 Members of the Association of Secondary Teachers of Ireland (ASTI) face losing thousands of euro even if they suspend their industrial action, it has emerged.

Thousands of members have lost in the region of €3,000 as a result of financial emergency legislation that has frozen their annual increments and locked members out of a range of other payments.

The is due to the ASTI’s rejection of the Lansdowne Road agreement, which provides for limited restoration of austerity-era pay cuts.

The union’s leadership met senior Department of Education officials on Monday, and union chiefs said they were told there was no chance that retrospective pay would be available to members.

While a suspension of industrial action would result in a resumption of payment, any losses incurred by members are likely to be permanent.

In an email to members, ASTI general secretary Kieran Christie said the leadership met with the Department to discuss its upcoming special convention where members will debate suspending their industrial action.

“We posed a series of questions and discussed matters in a general way,” he wrote.

“The Department stated that they would be constructive in a context of adoption of the motion which will be put to convention. However, we were also told that with regard to retrospection ‘that boat has sailed’.”

The ASTI is due to hold a special convention on Saturday, June 10th, to discuss a possible suspension of its campaign of industrial action.

This follows a grassroots revolt from members who say they are concerned at the impact its strategy is having on members who are losing out on pay restoration and, in the case of new entrants, permanent contracts.

The union’s leadership was criticised by some members during its annual convention last month, with one member describing it as the “North Korea of the trade-union movement”.

Suspending industrial action would restore future increments and other payments to ASTI members, along with faster access to contracts.