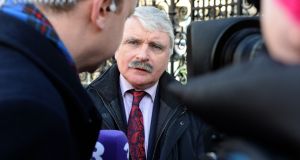 Fianna Fáil TD Willie O’Dea accused the Citizen Information Board of failing to consult with either the staff or the clients of Mabs on its proposed restructuring. Photograph: Eric Luke

Staff at the Money Advice and Budgeting Service (Mabs) are “horrified” at proposals to reorganise the service, an Oireachtas committee has heard.

Fianna Fáil TD Willie O’Dea said all the staff he had spoken too “without exception” were opposed to plans which would replace 51 Mabs companies across the State with eight regional companies.

Mr O’Dea accused the Citizen Information Board (CIB) of failing to consult with either the staff or the clients of Mabs. He also said no cost-benefit analysis had been done on the proposal.

The CIB is the statutory authority responsible for the delivery of Mabs services.

At a meeting on February 15th, the board of the CIB decided to restructure Mabs. CIB chair Ita Mangan told the committee it did not have the resources to properly monitor all 51 Mabs companies in a satisfactory manner. When the board took over Mabs in 2009, it had 92 staff. Now it has 74.

Ms Mangan suggested the reorganisation would be better for governance, accountability and value for money.

She also stressed that Mabs clients, including those in mortgage arrears or those struggling with bills, would receive the same service as before while Mabs made the transition from a local to a regional service.

However, she acknowledged that she could not “hand on heart” say there would be no change to the service once it was reorganised. “My hope and my expectation is that there will be massive improvements, that we will have more Mabs services,” she said. “Everyone with mortgage arrears will have access to Mabs services.”

Mr O’Dea said the reorganisation of the service could actually end up costing the State more and so the taxpayers would be asked to fork out more money for the same service.

He said Mabs was based on a local, volunteer-based ethos and if that was removed the service would be threatened.

He said volunteers have “no interest – none” in volunteering to help out at Mabs if it is regionalised.

“If you do something that will risk losing volunteers, it means the whole thing is in danger of collapse,” he said.

Sinn Féin TD Martin Kenny said the regionalisation of Mabs would see it move from being a voluntary organisation to one dominated by the Civil Service. “That, I think, is a dangerous path to go down,” he said.