More than 27,000 people sign a petition against the Government’s Heritage Bill 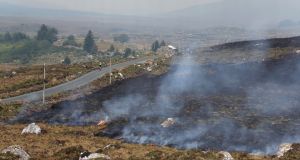 A lone cyclist passes by the smouldering gorse on the Seanafeistin Rd close to Cloosh Valley in Connemara on May 9th. Photograph: Joe O’Shaughnessy

Government plans to extend the gorse burning season until the end of March are deeply flawed and will lead to more of the devastating fires that have raged in various parts of the country in recent weeks, according to the Green Party.

Green Party Senator Grace O’Sullivan said Minister for Heritage Heather Humphreys seemed focused on extending the burning season despite opposition from numerous groups and more than 27,000 citizens who had signed a petition against the move.

“Gorse fires are destructive and dangerous. Some burning is healthy and important but the recent spate of fires is out of control. Burning is illegal from March 1st through to September, yet the country has been burning continuously all March, April and now into May,” she said.

Ms O’Sullivan said there was little chance that all these fires were accidental and the Government needed to act to support the National Park and Wildlife Service in their work to prevent such catastrophes from happening.

“Enforcement is essential to deter illegal fires. At present, no farmer has been sanctioned under Single Farm Payment rules for illegal gorse fires,” Ms O’Sullivan said, adding that extending the burning season would have serious consequences for wildlife.

“The Heritage Bill aims to extend burning into March legally, worsening the problem and doing untold damage to nesting birds and setting dangerous fires at a time that we can now obviously see is too warm and dry for burning to be done safely.”

“Incredibly beautiful landscapes have been devastated by massive fires in recent weeks. We’ve seen the devastation locally, Gorse fires threaten lives and livelihoods - the Government must ensure proper enforcement of the legislation and abandon plans to extend the burning season into March.”

Cork North Central Green Party representative Oliver Moran said that no one could condone burning at this time of year and it was incomprehensible that Minister Humphreys would “actually be considering encouraging burning late into spring”.

“When you see the energy that the emergency services, volunteers and Defence Forces have to put into controlling these blazes - and the upset that people have hearing the screams of animals being burned alive - you just have to wonder what she is thinking.”

An Taisce has joined with Birdwatch Ireland, Hedge Laying Association of Ireland and Irish Wildlife Trust to campaign against Minister Humphreys’ proposed changes which, in addition to allowing burning until the end of March would allow cutting of hedgerows from August 1st.

“There is overwhelming evidence that this proposal will have serious adverse consequences for Ireland’s already threatened and declining biodiversity. In recognition of this over 27,000 people have signed our No To More Slash and Burn to date,” An Taisce said.