Comey ‘better hope’ there are no tapes of talks, says Trump

President fires volley of tweets, including warning former FBI chief about ‘leaking to the press’

US president Donald Trump has called James Comey, the FBI chief he fired, a 'showboat' and a 'grandstander' on an NBC television interview. Video: NBC 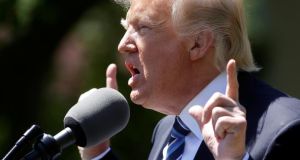 US president Donald Trump appeared to threaten James Comey with the release of “tapes” of their private conversations as he lashed out at the man he fired as FBI director in a flurry of angry morning tweets.

The US president warned the former agency chief against leaking to the press amid conflicting accounts of the events surrounding his explosive sacking this week.

“James Comey better hope there are no ‘tapes’ of our conversations before he starts leaking to the press!” the president tweeted.

Mr Trump’s outburst came amid growing scrutiny over the White House’s account of how Mr Comey was sacked, particularly its initial claim that Mr Trump had only fired him on the recommendation of his new deputy attorney-general Rod Rosenstein – a claim that Mr Trump laid out in his letter of dismissal.

There are differing accounts of a private dinner between Mr Trump and Mr Comey in January. The New York Times reported that Mr Comey had told associates the president asked him twice at the dinner to pledge loyalty to him, which the FBI chief declined to do. The White House disputed the account, and Mr Trump told NBC the dinner was “very nice”.

At two separate press briefings this week, White House deputy press secretary Sarah Huckabee Sanders insisted Mr Trump had decided to dismiss Mr Comey because Mr Rosenstein had urged him to do so.

James Comey better hope that there are no "tapes" of our conversations before he starts leaking to the press!

Yet on Thursday she was contradicted by the president himself who, in an interview with NBC News, said he had been planning to fire Mr Comey whatever Mr Rosenstein’s views.

“I was going to fire regardless of [his] recommendation,” Mr Trump told NBC. The president also for the first time linked the decision to terminate Mr Comey with the FBI’s investigation into possible links between the Trump campaign and a Russian effort to influence the 2016 election in their candidate’s favour.

“In fact, when I decided to just do it, I said to myself, I said, ‘You know, this Russia thing with Trump and Russia is a made-up story, it’s an excuse by the Democrats for having lost an election that they should have won.”

In the NBC interview the president played down his Russian business connections, which Republican senator Lindsey Graham has previously said he wants to explore. A letter from the president’s lawyers, Morgan, Lewis & Bockius, released on Friday, publicly set out Russian transactions reported on Mr Trump’s tax returns for the first time.

It said a review of 10 years worth of returns showed no income from Russian sources apart from “a few exceptions”. These included income from the 2013 Miss Universe pageant held in Moscow and a property sold to a Russian billionaire in 2008 for $95 million.

In addition, the letter, dated March 8th, 2017, said that it was likely that the Trump Organisation had engaged in sales of goods and services to Russians or Russian entities including rounds of golf, condominium and hotel bookings. The amounts involved in respect of the latter were “immaterial”, the letter said. Mr Trump has repeatedly refused to release his tax returns, making it impossible to verify the conclusions.

Mr Trump defended his press staff on Friday and suggested that media briefings could be cancelled. “As a very active President with lots of things happening, it is not possible for my surrogates to stand at podium with perfect accuracy!” Mr Trump tweeted.

“Maybe the best thing to do would be to cancel all future ‘press briefings’ and hand out written responses for the sake of accuracy???”