Every community expresses its basic values in the way in which it treats a language, President Higgins tells rally 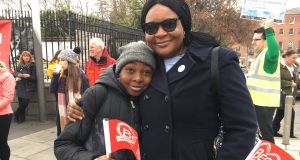 Dean Afolabi (11) with his mother, Tomi Matuluko at the Beo festival in Dublin. Dean is fluent in Irish and attends Gaelscoil an Bhradain Feasa, near their home in Drogheda, Co Louth.

Thousands of people attended an Irish language street festival in Dublin city centre on Saturday, coming from all over the country for the ‘Beo’ (Alive) event.

Speaking in Irish, President Higgins invoked the memory of the first President of Ireland and founder of Conradh na Gaeilge, Douglas Hyde, referring to him by his pen name, an Craoibhín Aoibhinn.

“We are gathered together today, young and old, fluent speakers and learners, city dwellers and rural dwellers, to celebrate our heritage, our ancient culture – which we have conserved despite the problems and challenges of history, the most important, most valuable, most beautiful part of our culture: The Irish language, the native tongue of this island.

“We are gathered together to celebrate the vision of an Craoibhín Aoibhinn and his colleagues, and to exhilarate and to motivate the work which will be done in the coming years.

The president had words of support for those who might be struggling with the language but also threw down a challenge and asked the public to welcome Irish into their lives .

“For those of you who love our language but may not be confident speaking Irish. The revival of our Irish language starts with each and every one of you.

“I invite everyone, starting this year in Bliain na Gaeilge, to welcome the Irish language into their lives. To experience, relearn, re-engage with it. Give it a second chance. Dare to cherish it. Dare to value it. Dare to use it. Dare to recognise and love it as the most essential part of our culture. However much or little of the language you have, I urge you to use it. I promise you, it will be easier than you imagine!”

His mother Tomi Matuluko, who came to Ireland from Nigeria 15 years ago, accompanied him.

Dean is fluent in Irish and attends Gaelscoil an Bhradáin Feasa, near their home in Drogheda, Co Louth. He said there was “no difference” to learning Irish and English, and he enjoyed his school.

His mother Tomi said the pair travelled to the Beo event, because “we are proud to be Irish citizens”.

“My son here speaks Irish, he goes to Irish school, we have to celebrate our heritage, so that’s why we are here. We are here to show we have integrated and we are proud to be Irish,” she said.

Buses travelled from 15 locations around the country to the event which started at Parnell Square at 1pm. A rally proceeded down O’Connell Street at 2pm to Merrion Square, where the festival took place.

Event director Julian de Spáinn said the day was a chance for those with an interest in the Irish language “to come together and celebrate”.

“I suppose what Beo is all about today is to show the vitality and vibrancy of the language. What we’re showing is despite 125 years of revival that there’s still challenges out there, and we do face many, especially in Gaeltacht areas.

“The public in general have a huge interest in the language, and they’re always looking for more opportunities to use it. So today is an opportunity to come together. It’s a chance to celebrate and realise the language is so integral to who we are as a country,” he said.

Sarah Scannell was another Irish language speaker who attended the festival. Living in Dublin, she has a young son in a Gaelscoil.

“We came out as a family, there’s three generations of us here today. We make an effort every day to speak it,” she said.

The festival was an opportunity to bring people interested in the language together, which was important, “especially when you’re trying to pass it on to the younger children,” she said.

The growth in popularity of Gaelscoileanna was “great” she said, but added it was important to make sure they were open to children of immigrant families as well. “The schools are doing a great job to try and make it more accessible to people that are coming into Ireland” she said.