IRFU and Ulster confirm departure of Jackson and Olding 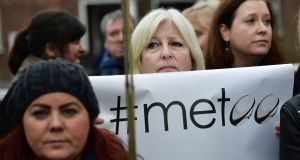 Protesters demonstrate outside the home of Ulster Rugby at Kingspan stadium in Belfast on Friday. The demonstration, entitled Stamp out Misogyny at Ulster Rugby, was organised at the first Ulster home game since the acquittal of Paddy Jackson and Stuart Olding following a rape trial. Photograph: Charles McQuillan/Getty Images

Ulster Rugby and the IRFU have revoked the contracts of Paddy Jackson and Stuart Olding.

In a brief statement issued today, the player’s province and the Union said this was with immediate effect, leaving the players’ careers in limbo.

Fellow Ireland and Ulster player Craig Gilroy has beenalso disciplined for sending one of the offensive messages that was outlined to the court.

He had already been made unavailable for selection and will now face a further two-week suspension.

This decision is the conclusion of a review conducted by the IRFU and Ulster following the Belfast rape trial verdict on March 28th, when Jackson (26) and Olding (25) were found not guilty of raping the same woman at a house party at Jackson’s south Belfast home in June 2016.

Today’s statement, issued at precisely 11am, by the IRFU and Ulster Rugby, said: “Following a review, conducted in the aftermath of recent court proceedings, the Irish Rugby Football Union and Ulster Rugby have revoked the contracts of Patrick Jackson and Stuart Olding with immediate effect.”

“It has been agreed, as part of this commitment, to conduct an in-depth review of existing structures and educational programmes, within the game in Ireland, to ensure the importance of these core values is clearly understood, supported and practised at every level of the game.”

Both players were under contract with Ulster and the IRFU until June 2019, but included in their contracts would have been a clause about bringing the game into disrepute.

It is understood that Ulster and the IRFU came under increasing pressure from sponsors not to have Jackson and Olding play for the province again.

Earlier last week, Ulster’s longest term sponsor, Bank of Ireland (BOI) issued a statement saying: “As a sponsor of Ulster Rugby, Bank of Ireland is highly concerned regarding the serious behaviour and conduct issues which have emerged as a result of the recent high profile trial.”

“The Bank has formally conveyed these concerns to the CEO of Ulster Rugby. It is of paramount importance to Bank of Ireland that our sponsorship activity aligns with and supports our core values, and reflects positively on Bank of Ireland through association.”

Jackson has played 25 times for Ireland, and Olding has been capped four times.

Immediately following the trial Jackson stated his intention of resuming his career with Ulster and Ireland through a statement issued by his lawyer, which said: “As for Paddy, his main priority now is to return to work. That means getting back on the rugby pitch and representing his province and his country.”

Jackson subsequently released a statement on April 6th in which he stated he was “ashamed that a young woman who was a visitor to my home left in a distressed state” and that he regretted the events of that evening.

In a statement released on Saturday, Paddy Jackson said: “I am deeply disappointed about the outcome of the IRFU and Ulster Rugby’s internal review.

“However, I recognise that my behaviour has fallen far short of the values expected of me as an international player, a role model for the game of rugby and as a son and a brother. I am truly sorry.

“Since I was a young boy it was my ambition to play for Ulster and Ireland and I am extremely proud, privileged and honoured to have done so. It is therefore with great sadness and regret but with many cherished memories that I leave that behind.

“I would like to thank everyone who has supported me throughout this process. I have taken great strength from that support. I’d also like to thank Ulster and Irish rugby for the opportunities that they provided for me and I wish them, and all my former team mates, every success.

“My focus in the months and years ahead will be on rebuilding the trust placed in me by people throughout Ulster and Ireland.”

It said: “It is with regret that I have been informed that the IRFU have decided to revoke my contract.

“As I said outside court following my acquittal, I am and will always be fiercely proud of having played for my province and country.

“I very much wished to continue to have the opportunity to represent them.

“Regrettably, influences outside of my contractual arrangement have made it impossible for that to happen.

“The treatment that I have received since my acquittal, both fair and unfair, has made me even more determined to prove myself.

“With the support of my family and friends I shall seek new challenges elsewhere. I bear no one any ill will.

“I am very sorry that this day has come to pass.

“To those who have supported me through these last 20 months and especially the fans who continue to support me, I thank you all.”

Around 250 people staged a protest outside Ulster Rugby’s stadium on Friday night ahead of the team’s first home game since the two players were acquitted of rape.

Belfast Feminist Network organised the rally close to one of Kingspan Stadium’s entrances, ahead of the game against the Ospreys, to send a message to sports officials about the responsibilities it says they have.

They also called for action against what they claim is a misogynistic culture within rugby. An intense debate on the players’ future has been played out since the verdicts.