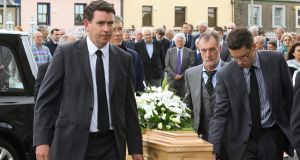 Fine Gael minister Austin Deasy (80) was recalled at his funeral as a politician who delivered for his constituents in his Waterford constituency for 25 years.

His brother, Fr Billy Deasy, told mourners at the service held in St Mary’s Church in Dungarvan on Monday his late brother, who died at University Hospital Waterford on Saturday, had a family life and a political life but they were here to celebrate his life in its entirety.

“He was intransigent – that does not mean he was always nice. He was just a yes or no man but he did listen and he did do as his political run shows us,” said Fr Deasy who brought smiles to the faces of mourners when he said, contrary to what many thought, he was not his brother’s twin but his older sibling.

He also prompted chuckles when he revealed he had “never voted for Austin Deasy but you should not get the wrong idea when I say that – I was never in Ireland for an election as my Augustinian superiors had me scattered around the world.”

Leading the mourners were the late Mr Deasy’s widow, Kathleen, and the couple’s adult children, Sally, Jane, Jamie and current Waterford Fine Gael TD John Deasy, who succeeded his father when he retired from politics in 2002, and the late Mr Deasy’s siblings, Fr Billy, Joe, Pat and June.

Fr Deasy recalled that his late brother had been born in Dungarvan in 1936 and said seeing many familiar faces at Kiely’s Funeral Home was like watching “a history of old Dungarvan”.

On behalf of the family Fr Deasy thanked the many mourners who had rearranged their schedules and travelled long distances to attend the funeral.

Among the Fine Gael TDs to attend were Jim Daly from West Cork, Michael D’Arcy from Wexford, Damian English from Meath, John Paul Phelan from Kilkenny, Pat Deering from Carlow as well as Senator Tim Lombard from Cork.

There was a poignant moment when many in the congregation joined in with soprano, Muriel Keohan as she sang Dungarvan, My Home Town as the late Mr Deasy’s coffin was carried from the church for burial in the adjoining cemetery.

Covid-19: Taoiseach warns of restrictions in Ireland’s cities as hospital cases pass 100 13:47
Minister says ‘rules apply to everyone’ after MP pictured on train without mask 13:16
Father speaks of ‘great courage’ of murdered daughter as man convicted 13:46
Highly-disturbed teenager who has threatened to kill mother due for release 12:25
Covid-19 cases higher in areas with large proportion of renters, CSO says 12:21